Before getting into specifics, we need to mention that some of the information you are about to read requires a broader understanding of certain concepts. The reader is therefore strongly advised to read each of the essential constructs listed in the column to the right before proceeding. These constructs reveal the basic connection between the letters of the Name and the multidimensional mathematic and geometric characteristics of the luchot, both in their divided state and combined cubic form, along with an explanation of its internal geometry that casts a shadow known as a magen david. There is a special connection between the Name, the luchot and the geometry of the magen. The purpose of this blog is to show how they connect with one another, and to reveal where this unique Signature of the Architect is hidden in each week’s parashah. Once you are familiar with these constructs you can more fully appreciate each post.

Given the numbers, sets of numbers and ratios between the sets found in the last parashah, relative to the ratio of phi; relative to the measurements of the tabernacle; and their connection to God’s Name, the description of the robe with its components might be altogether different, and so I offer the following for consideration:

The number 70 has an indirect relation to God’s Name through a segment of the geometry in the royal seal (three-dimensional magen david). The number 36 is a facet of the Name as well, in that it is half of 72, but half of 72 is just that (only half) and so its connection is also somewhat indirect. The number 72 has a direct connection to God’s Name, in that it is the number of triplets, but still just one third the number of letters. We pointed out in (last week's) post on Parashah VaYakhel, that without the third wall of the Mishkan, there were only 2 x 72 (handbreadths) or 144 elements, and so the reflection fell 72 short of the mark. However, when we added the third wall, which was 72 handbreadths, the total measurement became 3 x 72 or 216 handbreadths, which properly reflected not only the number of letters in the Explicit Name, but also the triad nature of that Name.

In the case of the robe, if there were 72 pomegranates then there would be 72 bells and we would have the same problem we had in the last parashah concerning the walls (2 x 72 = 144). Each opinion thus far offered, is inadequate to reflect both the number and nature of the letters in His Name. In the case of 72, the total number is missing a vector or component of the triad form (see the post on VaYakhel for a more complete explanation). Briefly, in the case of the walls of the mishkan, there was a third wall (a third set of 72 handbreadths) that came along to reconcile the discrepancy. Is it possible there is yet another number to consider in describing the bells and pomegranates?

The Torah describes the hem of the robe as having a “bell and pomegranate,” as though they were married together in pairs at the bottom of the robe. In other words, they could have been side-by-side; or maybe one inside the other (as suggested in some sources) but whatever their position, they were somehow juxtaposed one against the other like twins. Notice also that the phrase "bells and pomegranates," is repeated twice! Two sets of twins should sound familiar.

Since there were two items, bells and pomegranates (and the phrase is repeated twice) then by logical inference the form would seem to mirror that of the luchot, which were two mathematic and geometric twins brought down twice in the form of 108 opposite 108 (cubic handbreadths). Might there have been 108 pomegranates opposite 108 bells?   If this were the case, from a purely hypothetically standpoint of course, how might they be distributed around the bottom of the robe. Consider what happens, for example, if they were not merely adjacent to one another, but also over top of one another, and staggered triangularly as pictured below.

In this configuration, the hem of the robe with its bells and pomegranates would be a mathematic and geometric mirror image, not only of the walls of the mishkan that were both 3 x 72 and 2 x 108 at the same time, as shown in the picture posted last week in VaYakhel, but it would also reflect the mathematic and geometric characteristics of the luchot. The requirement in the written Torah would be met, as there would be "a bell and a pomegranate, a bell and a pomegranate all around the bottom" as specified. More importantly, the characteristics of the bells and pomegranates would mirror the number and the triad nature of the letters in the Explicit Name. 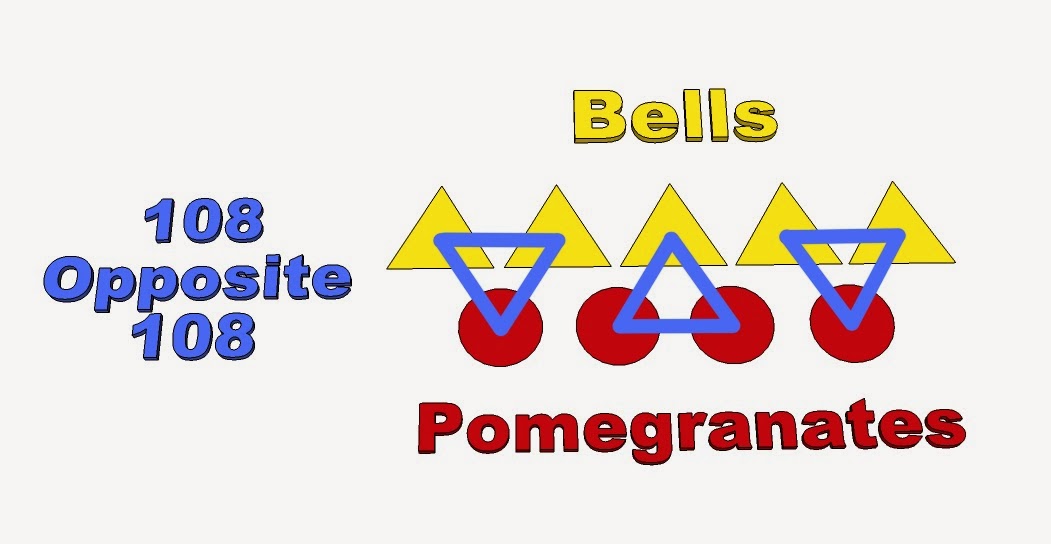