The last four or five posts have demonstrated a clear connection between the letters of God’s Name and various ancient and modern systems of measurement. In this week’s parashah we are told: “Do not falsify measurements, whether in length, weight, or volume. You must have an honest balance, honest weights, an honest dry measure and an honest liquid measure. I am God your Lord who took you out of Egypt. Safeguard My laws and keep them.” Having  seen the connection that these systems of measurement have with God’s Name, we now know why this is so important. To violate this law is not only a sin against man, for having cheated someone, but also a sin against God for having desecrated His Name, which quite literally defines those measurements.

In this post we will focus on two additional systems and show how they mathematically connect to the nature and number of letters in the Name. Meanwhile, if you are new to this blog and have not yet read the essential constructs listed in the column to the right, please do so before proceeding. They explain some of the basic connections between the letters of God's Explicit Name and the multidimensional mathematic and geometric characteristics of the luchot, both in the divided state and combined cubic form, along with the internal geometry that casts a shadow known as a magen david. There is a special connection between the Name, the luchot and the geometry of the magen. The purpose of this blog is to show how they connect with one another and to reveal where the Signature of the Architect is hidden, not only in each week’s parashah, but the physics of time and space, quantum mechanics and celestial dynamics to name a few. Once you are familiar with these constructs you can more fully appreciate each post. In the case of this parashah, it would also be helpful to have read the posts on Metzora, Shemeni, Tazria and VaYakhel, as they all deal with the connection that the letters of the Name have with certain units of measure.

The two additional systems mentioned above are the ephah and the omer. There were actually to different units of measure known as the omer. The larger was 100 times the size of the smaller. The Torah mentions the smaller of the two, which was one tenth of an ephah (eipha) while sefer Ezekial mentions the larger of the two, which was 10 times the ephah. We will use the omer that consists of 10 ephah to demonstrate the connection mentioned above.  An ephah is 72 lugim (plural) with each log (singular) being equal to 36 drams. An ephah is thus 72 logs x 36 drams or 2,592 drams, and so the larger omer (which was 10 times that of an ephah) is 25,920 drams (remember these numbers).

The first thing you should note (or remember from the post on Metzora) is that the tangent at each 36 degree point around a circle, in terms of its two most significant integers is plus or minus 3.0 or .72 depending on the specific point around the 360 degrees of the circle (36 degrees times 10). The circle is, in this case, the circumference of the sphere defined by the six surfaces of the cube [of creation] ("foundation stone") that was, in its primordial state, the combined cubic form of the luchot. Please note that these measures of plus or minus 3.0 or .72 at each 36 degree point are a static function of the geometry, whereas the measure of the cube that surrounds this particular "circle" is 3 linear cubits by 72 square cubits in its divided, side-by-side state. This is one of many typical "points of convergence" in this one unique measured cube ["stone"] which is the mathematic foundation for the entire universe.

The volume of a sphere is .5236 the volume of the surrounding cube, but in the case of the this one unique precisely measured cube, it also defines the ratio of a cubit to a meter, where a cubit (6 handbreadths) is the measure for any given dimension of "the stone." The cubit just happens to be .5236 of a meter. The luchot is in reality (and quite literally) the common denominator for all systems of measurement (see such posts as the Seven Eyes of God and the Story of the Cubit Cubed among the constructs listed to the right).

So biblical systems of measure like the omer ~ which is 10 times the ephah ~ which is 72 times the log ~ which is 6 times the egg ~ which is 6 times the dram or 3 times the grogeret (6 x 6 x 3 being the measure of each luchot in handbreadths) or 2 times the olive (the number of luchot) are all related and ultimately defined by the actual measure of the luchot in handbreadths ~ which is volumetrically equal to 216 cubic handbreadths and a mathematic or geometric mirror image of (and literally defined by) the 216 letters in God's Name ~ which is 3 x 72 (letters) when perceived as a two-dimensional reflection of a one-dimensional string (the form that it takes when it is found as a contiguous stream of letters in the Torah as is known) or, 72 x 3 letters after permutation (as is known) when it is perceived as a two-dimensional reflection of a three-dimensional matrix, as would be the case with the volumetric properties of the luchot having in side-by-side form, a length, height, and volumetric measure of 6 x 12 (72) times 3 handbreadths. These facts should be carefully contemplated.

Consider also, that a sphere defined by the edges of a cube casts a "shadow" that is a essentially a two-dimensional circle. Is it possible, that this circle, when defined by the measure of the luchot  (which is again 72 x 3 cubic handbreadths in side-by-side form) with a total volumetric measure of 216 cubic handbreadths (all of which reflect the number and nature of the letters of God's Name) is actually what defines the movement of the stars under the rolling vault of heaven? Remember that the axis of the earth moves 1 degree every 72 years in relation to the rolling vault of heaven, and that the precession of the equinoxes takes 25,920 years to complete (the same number we just mentioned in the combination of biblical systems of measurement above).

Same numbers. Same sets of numbers. Same ratios. An omer was 10 times an ephah which was 72 lugim, which was 36 drams, or a total of 25,920 drams. Were "ancient people" able to accurately measure the movement of the stars and engineer their systems of measurement to match? Were the units of measure dictated by the measure of the cosmic blueprint? We should all know the answer to that question.

Everything is interconnected. The time allotted to man is proportionate to the time allotted to each constellation, and ultimately all 12 constellations, which is proportionate to the various biblical systems of measure (many of which are still in use today in one form or another with small deviations not withstanding) and each allotment originates in the measure of the luchot (think of it as the cosmic blueprint) which is itself "defined" by the 216 letters of the Name, or the signature geometry that is the subject of this blog.

Who would suspect that the measure of time in the movement of the stars, would somehow equate to the number of drams in an omer, or that this particular measure was a function of the number of years allotted to man, or that any of this was hidden within the ratio between the omer, the ephah, the log and the dram, or the degrees in a circle, or the tangent of specific degrees that relate to other units of measure? Yet we see from this, as we've seen so many times before, that the letters of God's Name have a real and tangible connection to the systems of measurements for liquid; weight; and volume, and as we saw in the post on Metzora, even the four dimensions of space-time.

All of the systems we've looked at so far have a direct connection to the number of letters in  God’s Explicit Name, as well as the triad nature of its letters. Our sages tell us that, "One who is careful with weights and measures will be successful in this world and the next." The reason should by now be exceedingly obvious.

Study the table below on biblical volumetric measures and (if you've read the essential constructs to the right) you will see the numbers associated with the measured geometry of the luchot (both the first and second sets individually or combined) that in turn reflect the number and nature of the letters of God's Name. 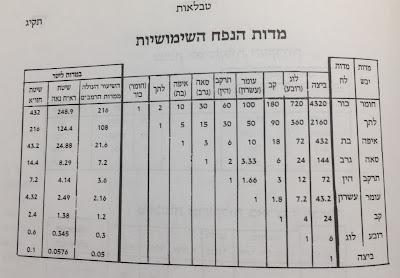 The Measured Geometry of the Luchot Shown Below 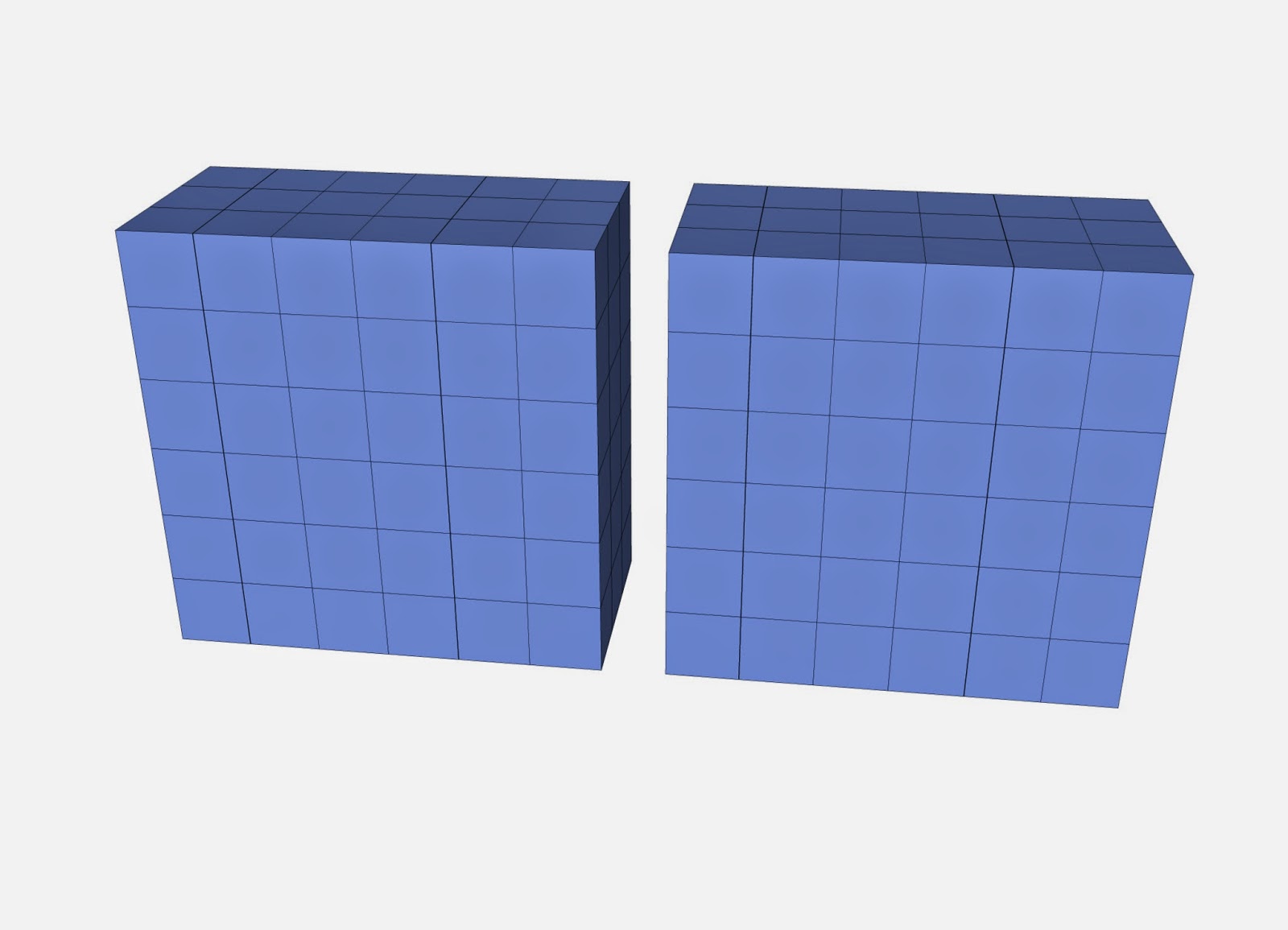 In addition to what has already been mentioned, the above numbers and the ratio between the numbers means that 1 hin = 432 drams (the volumetric measure of the altar of incense); 1/2 hin = 216 drams (the number of letters in God's Name) and; 1/4 hin = 108 drams (the number of cubic handbreadths in each luchot) and these are just a few examples.

Is all of this a coincidence? Not hardly. Everything is connected. Each system is really just part of a larger, more comprehensive system. All of the systems converge and reflect the mathematic and geometric characteristics of God's One Explicit Name. Each one, in its own way, is an aspect of that Name, and has been from the very beginning. It's just that the knowledge of these things was lost to mankind.

One final note on this post. Each of the systems of measurement that reflect the characteristics of the Name, have a connection not only to the units of measure but also to the characteristics of various events that play themselves out over time, or other elements conveyed in each parashah, and even the universe as a whole, in every minute detail. The underlying basis for these numbers, sets of numbers and ratios which are the mathematic and geometric characteristics of the Name, have a crystal clear reflection in quantum mechanics, the physics of time and space, string theory, biology and a multitude of other areas, that are mentioned in other posts. It is the Jewish people and only the Jewish people who have preserved the knowledge of God's Name down through the ages, and have protected the sanctity of that Name, despite great obstacles and ongoing persecution from the nations who have no remembrance of such things.
Posted by David at 8:43 PM