In Parashah Mattoth the Triad Havaya of 72 (the One Unique Explicit Name that binds all of the abbreviated forms together) is hidden in the characteristics of Israel’s military response to the actions of the Midianites and Moabites (the events that transpired on the advice of Bilaam beginning in Parashah Balak).

We will look at this military response in a moment. However, if you are new to this blog, please read each of the essential constructs listed in the column to the right before proceeding. These pages reveal some of the basic mathematic connections between the letters of God's Explicit Name and the multidimensional geometric characteristics of the luchot, both in the divided state and combined cubic form, along with the internal geometry that casts a shadow known as a magen david. There is a special connection between the Name, the luchot and the geometry of the magen, and together they form a unique signature. We refer to this geometry and its mathematic common denominator as the Signature of the Architect. The purpose of this blog is to show how all of these things connect, and to reveal where this 'Signature' is hidden, not only in each week’s parashah, but the physics of time and space, quantum mechanics and celestial dynamics to name a few. Once you are familiar with these constructs you can more fully appreciate each post. Those already familiar with these essential constructs will recognize the geometry associated with the Name, and in the case of Parashah Mattoth, will see the opposing half of the geometry that was hidden in the events in Parashah Balak that precipitated this military response.

We've already explained in our post on Balak that half the geometry of God’s Name could be found in Bilaam’s sacrifices and the ensuing plague, where the numbers, sets of numbers, and ratios between sets essentially matched or otherwise defined the geometry in the edges, borders, and faces of a single tetrahedron (“half” the magen that reflects the geometry associated with the 216 letters). Thus the first half of the geometry was mirrored in the actions taken by Bilaam, Balak, the Moabites, and their Midianite allies. Now, in this parashah, we see the other half mirrored in the geometry of the actions taken by Israel when they set out to destroy Bilaam and the five Midianite kings.

The geometry is expressed in the metrics of the verse stating that “one thousand from each of Israel’s tribes shall be sent into armed service - from the thousands of Israel, 12,000 special troops - Moshe sent forth the one thousand men from each tribe as an army along with Pinchas - in charge of the sacred articles and signal trumpets” (Numbers 31, 4-6).

These numbers, or really sets of numbers and their ratio with respect to one another, are a function of the geometry of the primordial torah (luchot) and they appear in the marriage of two opposing tetrahedrons (part of its internal geometry). These merge to form a three-dimensional magen david. In that marriage, each of its four faces is subdivided into three smaller faces, which means there are a total of 12 small faces on each of the divided tetrahedrons. These small faces in turn have three sides. In other words, the geometry of the tetrahedron just happens to match the geometry of the events involving the 12 tribes with three thousand from each divided into 1,000 for fighting, 1,000 for guarding the weapons, and 1,000 for prayer. This might at first appear to be a coincidence, but it is actually a repeating pattern seen throughout the torah, as you will see in a moment. The set of numbers is graphically depicted below so that you see how the geometric character of the events matches the geometric character of each component on one half of a star tetrahedron.

When we look at the numbers, sets of numbers, and ratios between sets that take into account the three thousand from each of the 12 tribes, we cannot help but note the connection they have with tetrahedral geometry, and specifically those aspects of its geometry that reflect the nature of the 12-letter (abbreviation of the) Explicit Name and its counterparts. The 12 thousand (fighters) plus 12 thousand (guards) and 12 thousand (in prayer) are like the 12 stones on one side of the Jordan, the 12 stones on the other side, and the 12 stones in the middle (explained in our post on Parashah Ki Thavo). Each is a reflection of a larger reality in which the 12-letter Name, it's 12-letter counterpart, and the 12 letters in the marriage between the two (the triad versions of the Tetragrammaton, Adnoot and Ekeyeh) define the nature of the events.

The geometry of the events in this parashah have been superimposed on the geometry of one half of the star tetrahedron below (or more specifically the clear half) to show how they correspond to one another. The geometry of each half in turn reflects the positions corresponding to 36 of the triplets (108 letters) that reflect one half of the events. The opposing half is mirrored in the events pertaining to what Balak and Bilaam did in Parashah Balak that led to these specific events (the military response). This half is shown in transparent blue and left blank because the events occurred previously. If you'd like to see how those events match the geometry of their respective half (the other 36 triplets or 108 letters) just reread that particular post.

The one-to-one correlation between the events, the geometry (within the combined cubic form of the luchot) and the letters of the Name must be contemplated in order to fully appreciate and comprehend its significance. 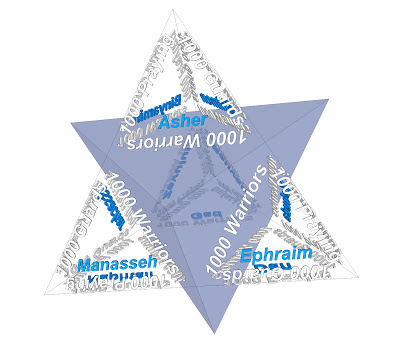 If you stop and think about it, the depth of this connection to the internal geometry of the luchot is actually quite astonishing. In addition to what has been mentioned thus far, before Pinchas left for battle, Moshe warned him that Bilaam might use sorcery to escape by ascending into the air. He added that if Bilaam attempted to flee with any of the Midianite kings, then Pinchas should use the Tzitz (the head plate of the Cohen on which was engraved “Holy to God”) to bring them down and destroy them. That’s exactly what happened, although some say that Pinchas also pronounced the Explicit Name. The geometry of this event also mirrors the characteristics of what would be the opposing tetrahedron. 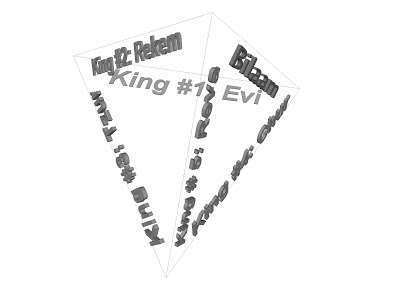 One or two parallels of this sort might be considered a coincidence. However, the sheer number of times we see this 'pattern' in the events, is a statistically significant indicator suggesting careful design and planning. What this design reflects is the geometry of the royal seal which in turn reflects the geometry of the Royal Name, and it leaves us with only one inescapable conclusion, and that is that God's Name really does "rule" over the events that transpire in this universe.

In summary, the numbers and sets of numbers that characterize the events in Balak, along with those we see in this week’s parashah, are the same as those we see in the geometry of a three-dimensional magen david, which in turn reflects the mathematic and geometric characteristics of God’s Explicit Name, expressed as either 2 x 108, or 3 x 72 depending on which part of the geometry is more relevant to the events being examined.

The average person would be incapable of perceiving the numbers and sets of numbers in the events of Mattoth and those of Balak, as elements in the complex three-dimensional geometry of the royal seal (magen david) or understanding the connection these events have to God's Explicit Name and as it pertains to the geometry of the luchot, let alone wrapping the narrative of a story around the mathematic constructs that define its characteristics. Although, once its been pointed out, its actually quite easy to see. The fact that this relationship exists, and that it mirrors this particular geometry, is indisputable, that it connects to God's Name is obvious, but not surprising, given all that we've seen thus far.

God's plan for Israel and the events corresponding to that plan are clearly a function of the mathematic and geometric nature of the blueprint (sapphire cube or combined cubic form of the luchot) and in this case, more specifically, the star tetrahedron or magen david (one of the constructs within the cubic form of the luchot) but again it is important to remember that what we are seeing is really a reflection of God's Name and the way in which its letters rule over mankind. The repeated connection this signature has with various events is quite clear and the conclusion inescapable. The Author of history (His-story) is indeed the Creator and His royal seal is often hidden beneath the surface of the story that is in the [geometry of the] sapphire cube3 (luchot/torah).
_____

Footnote 3 - The "story in the sapphire" (luchot) as explained in the post on the sapphire cube [of creation]- (Sefer Yetzirah 1:1)
Posted by David at 7:07 AM