Yithro said to Moshe: “Listen to me [and] I will give you advice.” He then advised Moshe to “seek out God-fearing men... who hate injustice..." and to "appoint them over [the people] as leaders of thousands, leaders of hundreds, leaders of fifties, and leaders of tens.”

The numbers and the ratio of one to another is somewhat illogical. Would it not be more  appropriate to use the same identical fractional proportion throughout, like 10s, 100s, or 1000s, where each is one tenth of its predecessor?

Before looking at this ratio more closely, those who are new to this blog should read each of the essential constructs listed in the column to the right before proceeding. These pages reveal some of the basic mathematic connections between the letters of God's Explicit Name and the multidimensional geometric characteristics of the luchot, both in the divided state and combined cubic form, along with the internal geometry that casts a shadow known as a magen david. There is a special connection between the Name, the luchot and the geometry of the magen, and together they form a unique signature. We refer to this geometry and its mathematic common denominator as the Signature of the Architect. The purpose of this blog is to show how all of these things connect, and to reveal where the signature geometry is hidden, not only in each week’s parashah, but also such things as quantum mechanics, the physics of time and space, celestial dynamics, biology, chemistry (etc). Once you are familiar with these constructs you can more fully appreciate each post.

As far as our introductory paragraph is concerned, we do not know why Yithro chose these particular fractional proportions. Perhaps he was familiar with a similar system of jurisprudence in Egypt. Or, perhaps these numbers just popped into his head. There is also the possibility that these proportions are a function of a larger reality based on the nature of the cosmic blueprint. Whatever the source, Moshe accepted the advice and implemented a system based on the ratios that Yithro suggested. So let’s take a closer look at the numbers, the sets of numbers and the ratio between the sets.

The ratio is quite interesting in light of the luchot and their internal geometry (where the dominant mathematic characteristic is 5 opposite 5 and a subject that we discuss so often throughout this blog). One of these constructs (the tetrahedron) is different from the other four, in that it is its own polar opposite (see the post on String Theory and the Luchot for details). In this case, the ratios pertaining to the system of jurisprudence suggested by Yithro are essentially a mathematic and geometric mirror image of these characteristics, either in whole or in part, and/or various multiples of those characteristics.

Throughout the course of this blog and its many posts pertaining to God’s Name, we have endeavored to show the relationship between the mathematic and geometric characteristics of the letters of the Triad Havaya of 72 as they pertain to the nature of the luchot, and the events and characteristics of things in the world below. To that end we have shown how various mathematic constructs define the edges and borders of a star tetrahedron (which casts a two-dimensional shadow known as a magen david). The characteristics of things happening in the physical universe often conform to these patterns.

Before we examine this week’s parashah in terms of these patterns, keep in mind once again, that David’s “shield” (magen) was not really a 6 pointed star. Nor was it a star tetrahedron. Rather, David’s shield was God Himself—and God has a Name—an Explicit Name—with specific letters—and these letters have certain mathematic and geometric characteristics which are identical to (and actually define the) various measurements of the luchot, as well as the geometry of a star tetrahedron or magen david within the luchot, hence the reference.   Take a moment to consider what has just been said.

This week’s parashah further demonstrates this connection, not only in terms of the five internal constructs and their polar opposites (5 opposite 5: where one is different from the other four, as mentioned above) but also in terms of the most dominant of these constructs and the one that's different (the tetrahedron and its opposite) and their internal geometry which also happens to consist of 5 unique constructs and 5 polar opposites (again 5 opposite 5: where one is again different from the other four, as shown in the model below).

To illustrate the significance of this particular iteration: when a tetrahedron is merged with another tetrahedron facing the opposite direction, each is subdivided. This results in additional mathematic constructs, that define much the same, in what amount to 5 smaller polyhedrons that have 5 polar opposites. Or, to put it another way, the merging of 2 tetrahedrons results in a total of 10 polyhedrons or "elements" with 5 in one tetrahedron opposite 5 in the other (modeled below). Moreover, at the risk of sounding redundant, one of these constructs (the octahedral core) is again different from the other four. Either way, any given polyhedron is 1/10 the total number of polyhedrons (the 10 resulting from the “marriage” of two tetrahedrons in what is now 1 star tetrahedron). As in the case of the one cube [of creation] that was divided in two, which has five internal constructs and five polar opposites, so too, a single star tetrahedron (the marriage of two tetrahedrons) together have five polyhedrons and five polar opposites.   So the same numbers, sets of numbers and ratios end up defining the geometric characteristics of both the internal aspects of the cube, and the internal aspects of the star tetrahedron that are hidden within the cube. In each case, the outer (revealed) geometry consists of 2 halves constrained by 5 (hidden) mathematic constructs that have 5 polar opposites (duals) for a total of 10.

These fractional proportions just happen to be the same as the proportions suggested by Yithro for the purpose of governance and/or the system of jurisprudence for the people. Taken by itself, the probability of this being a coincidence is not extraordinary. The proportions that Yithro suggested could well be considered a coincidence. However, given the repeated reflections of an identical nature, in each parashah, over and over again, we would be incorrect if we stated that it was not statistically significant in the grand scheme of things.

The picture below shows the subdivisions of 2 tetrahedrons after being merged with one another. For purpose of illustration the 2 tetrahedrons have been 're-separated' (from their configuration as a star) so that the individual elements can be more easily seen and counted. 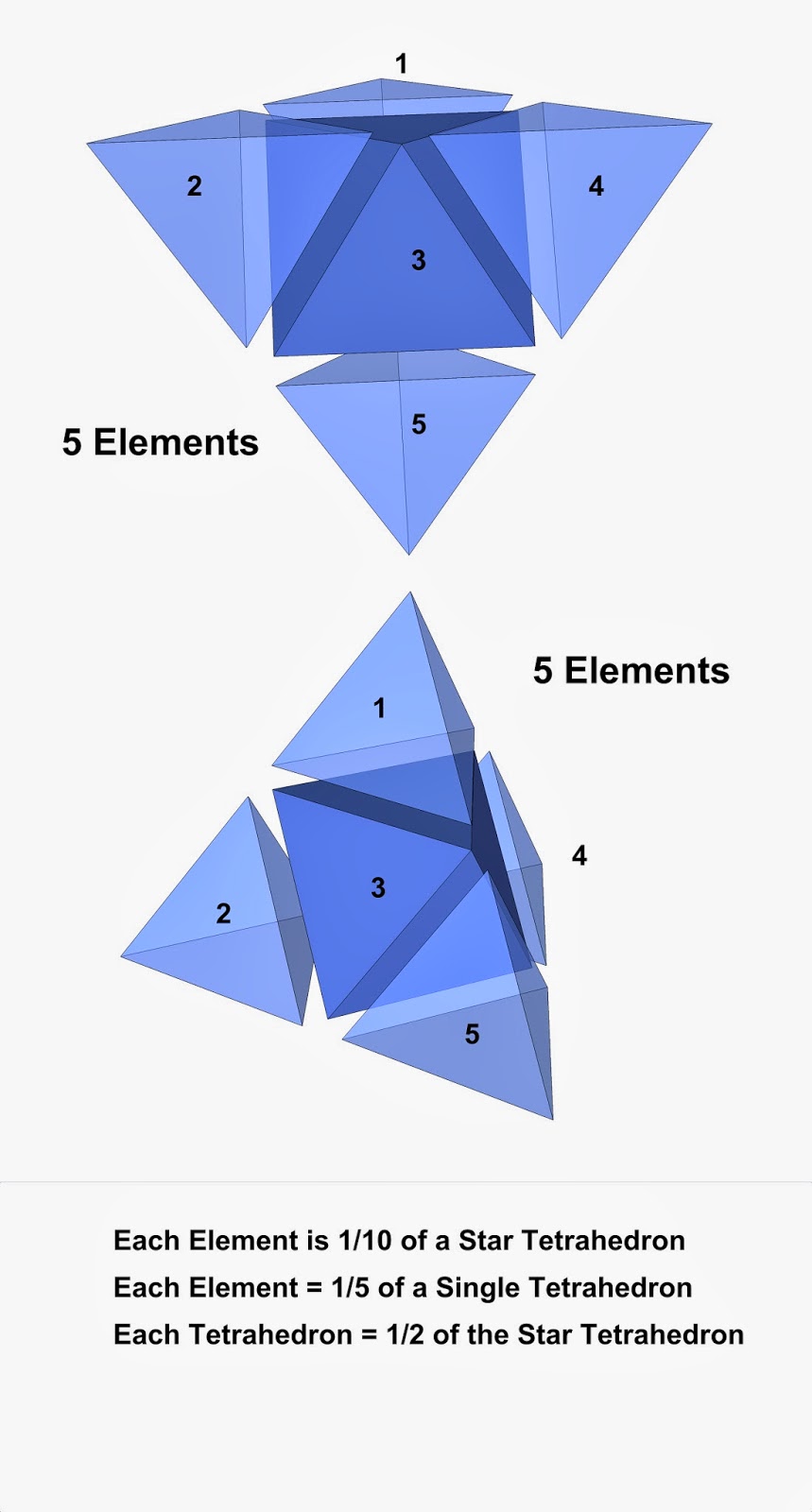 The relationship between the two, needs no further clarification insofar as the fractional proportions are concerned.