The geometry and mathematic characteristics of God’s Name are hidden in multiple places throughout this parashah. Each is particularly clear and quite remarkable when taken in context.

We will examine all of these in the paragraphs ahead. However, if you are new to this blog, please read each of the essential constructs listed in the column to the right before proceeding. These pages reveal some of the basic mathematic connections between the letters of God's Explicit Name and the multidimensional geometric characteristics of the luchot, both in the divided state and combined cubic form, along with the internal geometry that casts a shadow known as a magen david. There is a special connection between the Name, the luchot and the geometry of the magen, and together they form a unique signature. We refer to this geometry and its mathematic common denominator as the Signature of the Architect. The purpose of this blog is to show how all of these things connect, and to reveal where this 'Signature' is hidden, not only in each week’s parashah, but the physics of time and space, quantum mechanics and celestial dynamics to name a few. Once you are familiar with these constructs you can more fully appreciate each post. Those who have already read these essential constructs, will recognize the tetrahedral geometry associated with the letters of God's Name in the narrative of this parashah as well.

Insofar as Parashah Pinchas is concerned, the important things to note are the amounts specified in terms of their units of measure.

On Sukkoth and with Shemeni Atzeret the same measures and ratios apply!

Now let’s consider the geometry of the numbers, sets of numbers, and ratios between sets that we see in the above mentioned requirements.

You may recall from previous posts that 1/10 ephah equates to 7.2 lugim. That means 3/10 of an ephah for each bull are the equivalent of 3 x 7.2 lugim (21.6 lugim). This measure is a function of the luchot with the same ratio, that reflects the same characteristics as the Triad Havaya of 72 having 3 x 72 (or 216) letters. 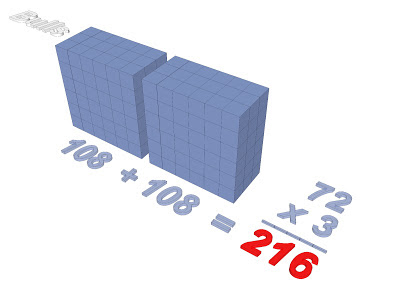 The 2/10 of an ephah for each ram however is not the same. This measure is equivalent to 2 x 7.2 or 14.4 lugim. It presents the same problem as the north and south walls of the tabernacle mentioned in the post on VaYakhel. When its beams1 were parsed according to the ratio of phi, the “golden portion” of each wall measured 72 handbreadths. Together, this portion amounted to 2 x 72 handbreadths and defined the measurement for the end of the Tabernacle with the Holy of Holies. The remaining (non-golden) portion of the 2 walls was 2 x 108 handbreadths. The north and south walls could therefore be described as a combination of 108 opposite 108 for one end of the walls, and 72 opposite 72 for the other end that was the Holy of Holies. 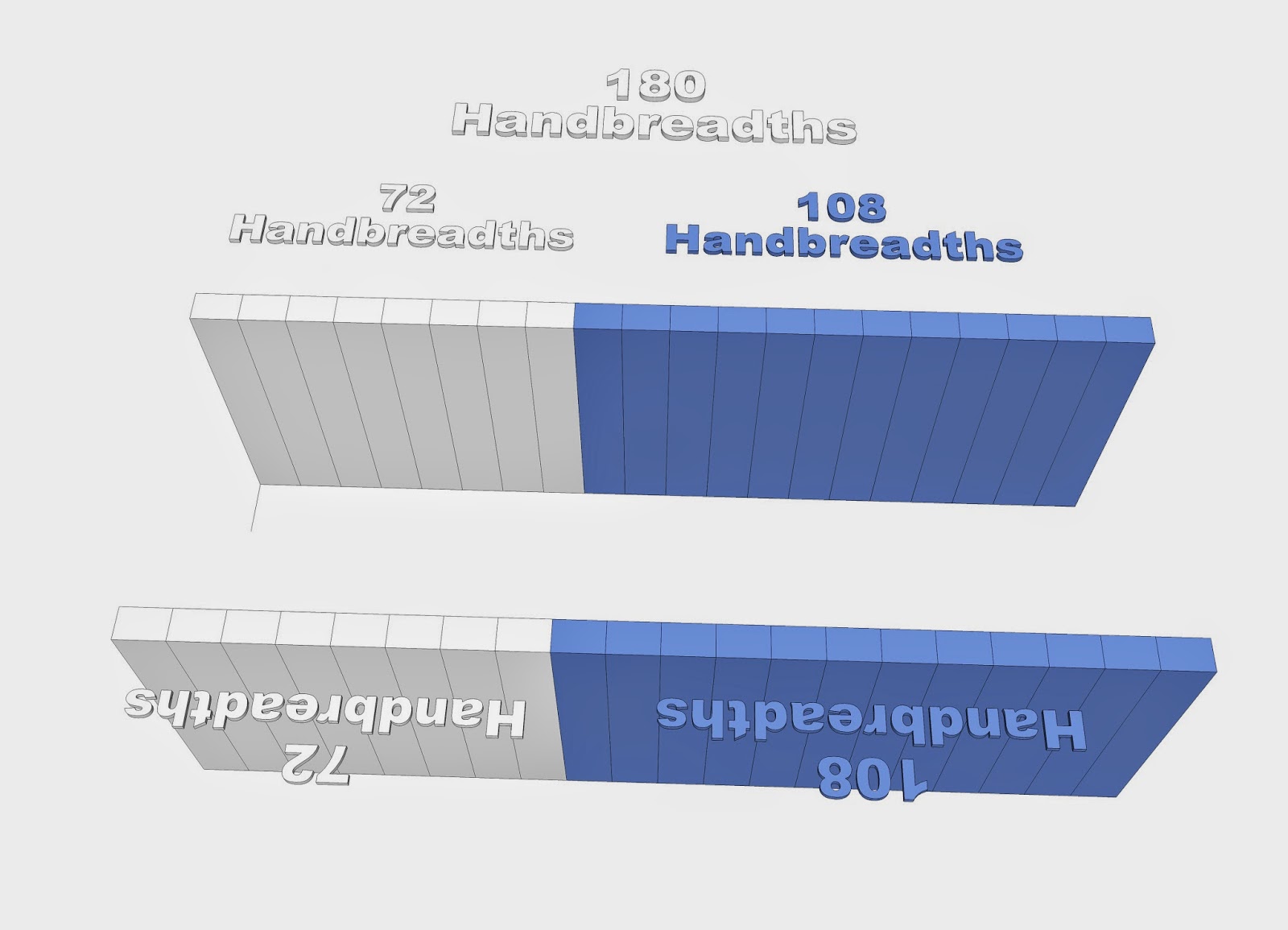 The linear portion measuring 108 opposite 108 is a clear reflection of the volumetric measure of the luchot that together were 2 x 108 cubic handbreadths, each being half the number of letters in the Explicit Name with a total of 216 letters, but what about the remaining portion? The problem was that the golden portion of the walls were 72 opposite 72, and these numbers represented only 2/3 of the letters. Where was the other 1/3? We seemed to be missing a set of 72 handbreadths that would be necessary for the walls to reflect the triad nature of the 72 triplets in the Name. But then, you’ll remember, a third wall came to reconcile the discrepancy, because as it turns out, the western wall consisted of another 8 beams that also just happened to be 72 handbreadths in length. The entire tabernacle was therefore a reflection of the Explicit Name. 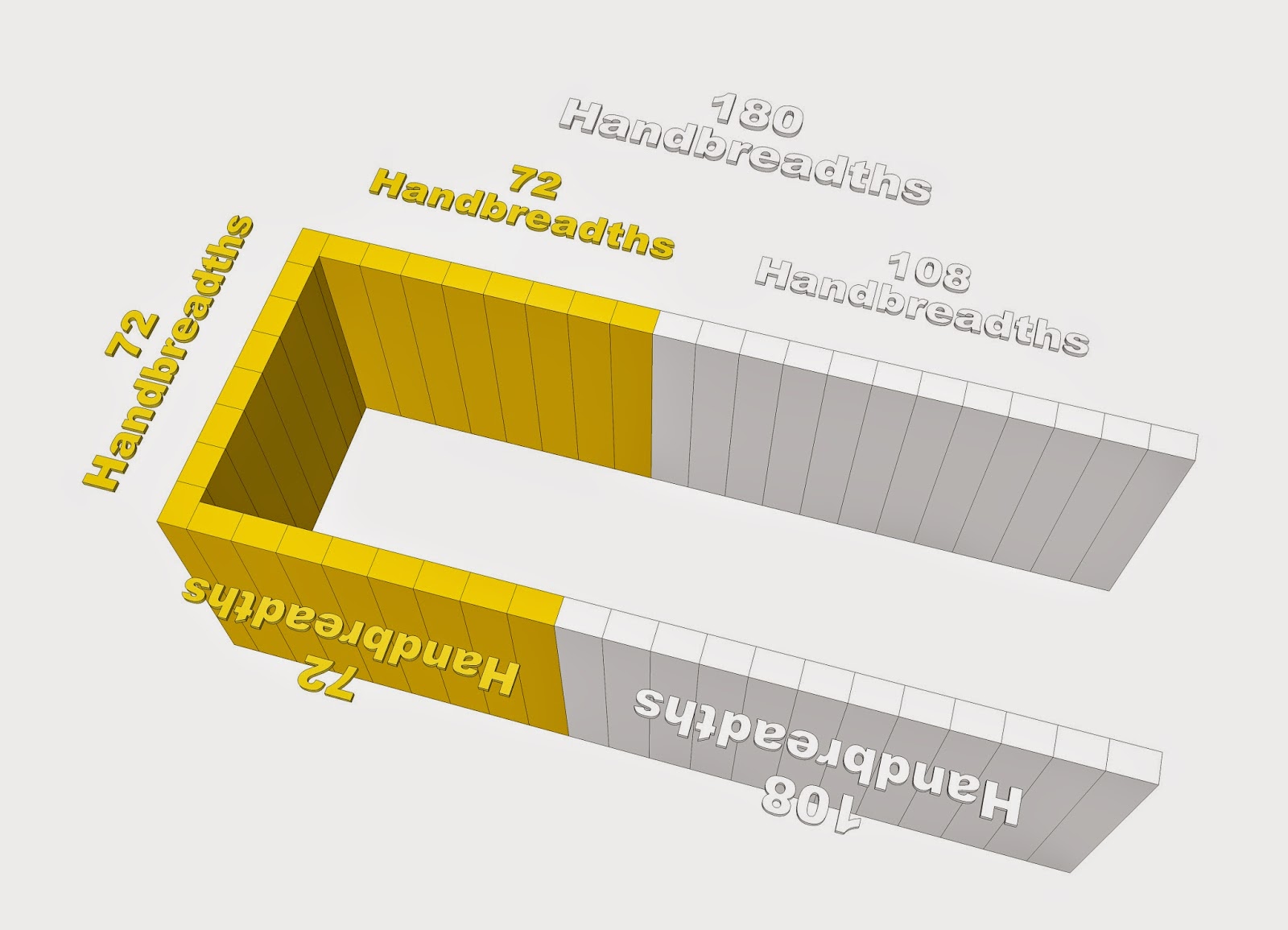 Having refreshed your memory on how the problem was reconciled in parashah VaYakhel  we now turn our attention back to how it is reconciled in this parashah where we see the same geometry.

The requirement for each ram was only 2/10 of an ephah, or 2 times 7.2 lugim. It therefore seems to fall short of the mark, like the golden portion of the tabernacle without the third wall. There needs to be a third component before the sacrifice will accurately reflect the nature of the Triad Name. We find that third component in the requirement for the sheep, where 1/10th ephah (another 7.2 lugim) comes to reconcile the difference. The total ratio between the rams and sheep is therefore like the ratio between the north, south, and west wall of the tabernacle, that combine to reflect the geometry of the Name as 3 x 72, or 216 letters. 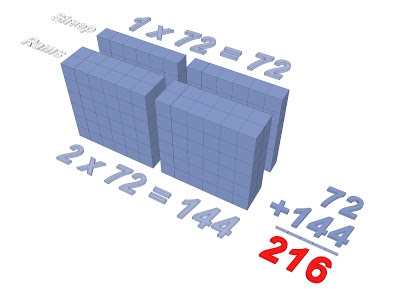 The measure for the sacrifices that require the "taking of life" are the opposite of the chemical and biological process that are involved in the "giving of life" that are wrapped up in what is called the Carbon-12 mystery that we explained in the essential construct on the Primordial Torah in the column to the right. There is always balance between the halves of a male~female universe, and it would appear that this balance is in effect 'stabilized' by the mitzvot performed by Israel.

Of course the connection is not limited to the ephah in terms of lugim required for the sacrifices. It is also found in the ratio of oil to wheat, and the amount of wine required for the libation.

In the case of the two daily sacrifices (the tamid) for example, each requires 1/4 hin of oil for each measure of meal. As mentioned in "Eggs and Olives" and other previous posts, there are 108 drams in 1/4 hin (although you may simply refer to them as a 1/6 fractional proportion of an egg). There are 108 drams for the morning tamid and 108 for the afternoon tamid, the total being equal to the number of letters in the Explicit Name (2 x 108 = 216). This is also a reflection of the luchot, where each half is 108 cubic handbreadths. It is also like Ya’acov and Esav, the twins who were born in the 108th year of the third millennium. In each case, the two halves are a reflection of the Name. The wine libation is essentially the same. The two sheep each require 1/4 hin, so again we have 2 x 108, or 216 drams. 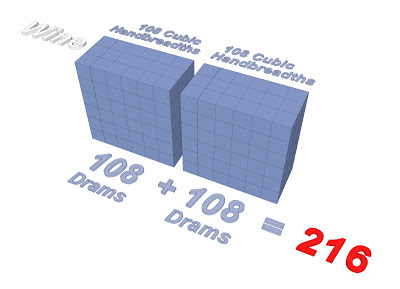 When we get to Sukkoth and Shemeni Atzeret, the total number of sacrifices is 215, which is one less than 216. These sacrifices take place over 8 days. The 7 days of Sukkoth transition into the 8th day which is Shemeni Atzeret, whereby the total reaches 215. This is like rising from a lower dimension to a higher dimension as shown in the cycles of 7 in BeHar and BeChuko-thai. Nevertheless, there are only 215 sacrifices in total, as opposed to 216. We’ll let you ponder the significance of the 'missing' component.

In the meantime, it's important to point out that the reflections we've been examining in this post (and indeed throughout the blog) are just a few examples. If you've read the essential construct entitled "The Primordial Torah" then you've seen the many ways that the entire universe becomes a metaphor for the 216 letters. It's just that the primal pattern is hidden from the casual observer. Students of Torah get a glimpse into much of this, because the closer you are to the source, the brighter the reflection. The Jewish people have an additional advantage in that they are the only descendants of Adam who have preserved this knowledge down through the millennia (beginning in the yeshivot of Shem and Ever). You will see where God's Name is hidden in the physics of time and space, quantum mechanics, celestial dynamics, as you progress through the many pages of this blog.

Next week we will once again see how events of the parashah reflect God’s Explicit Name in the form of a magen david. However, next week's "reflection" is the geometry of only a single tetrahedron or half the magen (108) because its opposing half (108) was the geometry in Parashah Balak corresponding to Bilaam’s sacrifices. One half is the "action" and the other half is the "reaction," where the actions taken by Israel in next week’s parashah (Mattot) are the opposite half of those taken by Bilaam and the Moabites/Midianites in last week’s episode.

Footnote 1 - There were 20 beams on one side of the Mishkan and 20 beams on the other. If the 20 beams of each wall are divided to the nearest beam according to the ratio of phi (1/φ x 20) then the 2 portions of the wall are 12 beams and 8 beams respectively. Each beam was 1 1/2 cubits in width, which is the same as 9 handbreadths. The portion consisting of 12 beams would thus be 108 handbreadths and the remaining portion consisting of 8 beams would be 72 handbreadths. The sum of the 2 portions (108 + 72) equals the length of the wall (180 handbreadths) and a two-dimensional reflection of the sphere within the combined cubic form of the luchot (180 +180 = 360 degrees). This is the origin of the spiral of life in the squares related to the Fibonacci sequence of numbers (knowledge of which not only pre-dates Fibonacci, but goes all the way back to the beginning). The first three iterations of the squares are a geometric representation for the 6 sides of the cube of creation (combined cubic form of the luchot) measured as cubits in two dimensions. The first two (identical squares) in the sequence are a representation of the two luchot and the 180 degrees of "the spiral" are a reflection of the three-dimensional sphere within the cubit-cubed.
Posted by David at 8:44 AM