This week’s parashah has a beautiful geometric reflection of the letters in God’s Explicit Name, hidden in at least three places, beginning with the text that tells us, ‘...these are the sons of Yaacov's wife Rachel."

If you are new to this blog then you should read each of the essential constructs listed in the column to the right before proceeding. These pages explain some of the basic connections between the letters of God's Explicit Name and the multidimensional mathematic and geometric characteristics of the luchot (tablets of the covenant) both in the divided state and combined cubic form, along with the internal geometry that casts a shadow known as a magen david. There is a special connection between the Name, the luchot and the geometry of the magen that creates a unique signature. The purpose of this blog is to show how they connect with one another and to reveal where this Signature of the Architect is hidden, not only in each week’s parashah, but the physics of time and space, quantum mechanics and celestial dynamics to name a few. Without the background provided by these essential constructs, the posts will make little sense.

Regarding the first instance of the three mentioned above, this Name is hidden within the details of the phrase referring to: “the sons of Yaacov’s wife Rachel,” and its counterpart: “all the souls coming to Egypt... not counting the wives of Yaacov's sons.”   In this segment of the text, Rachel is specifically identified as Yaacov’s wife. In the case of the other three matriarchs, Bilhah, Zilpah and Leah, the Torah merely says “these are the sons of...” without identifying them as Yaacov’s wives. Rashi finds this noteworthy, saying that Rachel is mentioned singularly as the wife because she was mistress of the household. However, there is another explanation. The ratio and the numbers are a faint reflection of the same math and geometry that appeared in last week's parashah.

Last week, Pharaoh’s dream encompassed a 14 year period, one in which Yoseph was not only a ruler but the most powerful man in the known world. This 14 year period of time was directly mentioned in the text, while the preceding 14 year period (starting when he was sold a slave) was not directly mentioned. The numbers, the ratio and the nature of the elements all correlate with the male-female polarity of the royal seal or magen david (with 14 elements in one half, opposite 14 elements in the other half) and the corresponding male-female letters of the Name (associated with each tetrahedral point) that sustain a physical universe in like form.

The time in which Yoseph was a slave had to be calculated by subtracting the year in which the “years of plenty” started, from the time when Yoseph was sold. These 2 periods of 14 years stood opposite one another, and also in stark contrast to one another, alluding to the Name of the Architect found in the geometry of the royal seal (three-dimensional magen david) as the 14 elements of the male and 14 elements of the female halves of a star tetrahedron. This in turn is a reflection of the mathematic nature of the Triad Name (recalling once again a tradition that the luchot were “tetrahedrons” and knowing that their combination in the form of a star tetrahedron is one of 5 internal mathematic constructs found with the combined cubic form of the luchot).   The marriage of the abbreviated forms of this Name can also be seen in the narrative where 1 wife (Rachel) was mentioned by name in the text. She was "different" from the other 3 (Bilhah, Zilpah and Leah) who were not mentioned. This is a reflection of the ratio between the letters of the 4 "couples" that are married together (in unification) or more specifically the Tetragrammaton and those in the Havaya of Adnoot, as explained in the post on Parashah Ki Thetze and also the Marriage of the Letters. It is also a characteristic in a primary geometric component of the royal seal, specifically the tetrahedron, which has 3 points in one (lower) dimension (corresponding to Leah, Bilhah and Zilpah) and 1 point in the dimension above (Rachel) specifically identified as Yaacov's "wife" in the text. This same geometry is observed throughout the Torah, one example being the 4 strands of tzitzith that are doubled over: 3 white and 1 techelet. Each is a facet that is a characteristic of the blueprint (luchot) which is in turn a facet of the Name and its abbreviations.

In this week's parashah we see the same tetrahedral geometry and the same reflection of the male and female halves, where Rachel was the matriarch with 14 male descendants, hence the specific reference to her as Yaacov's wife. As with the previous reflection, these 14 souls are also mentioned directly in the text “...these are the sons of Rachel... in all 14 souls.” The 14 daughters of Yaacov however, are not mentioned directly, but alluded to where it refers to the wives who were not counted (each son by tradition having a twin sister at birth). The combination of male-female “elements” (in the 14 sons mentioned, and the 14 daughters not mentioned) is a very bright reflection of the tetrahedral geometry in the royal seal. These were the daughters of Yaacov, 14 in all (the female) counting Dinah and the triplets of Rachel (2 of which were daughters). In other words 14 male opposite 14 female. So once again we have an allusion to the internal geometry of the luchot (tetrahedrons) in this particular form. For more information on this one-dimensional mathematic expression and its three-dimensional counterpart (which are both reflections of the royal seal and the letters in the Name) see last week's post on Miketz  and also the post on Emor.

In the second instance, the Triad Name is seen as a mathematic reflection of the words Israel (Yaacov) spoke to Yoseph “Now I can die, I have already seen your face, for you are still alive.” An explanation of this reference will have to wait until next week’s parashah, when this particular geometric reflection culminates in the events and the correlation is complete (in VaYechi).

The third and final instance that we will mention, is one of the more significant in the entire Torah where: “all the souls coming to Egypt with Yaacov... were 66,” together with “all the souls of Yaacov’s house coming to Egypt were 70.” This would seem to be a contradiction, except for the fact that 4 souls were already in Egypt (Yoseph, Aseneth, and their two sons  Ephraim and Menashe). The ratio of 4 to 70 is found numerous times in the Torah. It is found twice in this parashah alone. The first example is mentioned (directly) above. The second example is alluded too indirectly, where “Yoseph gathered up all the money [and] ...brought the money to Pharoah’s treasury.” It is well known that there were 4 treasuries of gold. What is not so well known is that each contained “70 quintles of the precious metal.” The ratio of 4 to 70 is also found in Mishpatim where, Moshe, Aaron, Nadav and Avihu (4) along with the 70 elders ascend before the throne (of God) and it is found in “11 kinds of spices were in it, as follows: stacte, onycha, galbanum, frankincense (4 spices) each weighing 70 maneh,” to provide the obvious examples.

These numbers or sets of numbers, and this ratio in particular (whether the 4 are included or excluded from the 70) holds a very deep secret that is examined at length in the post on "the Incense and the 216 Letters."

In-so-far as this post is concerned, it is sufficient to point out that when a tetrahedron (with its 14 elements) is subdivided by an opposing tetrahedron, the result is not only a magen david (in the geometric form of a star tetrahedron) but the number of elements in each (subdivided) tetrahedron increases (from the 14 mentioned above that were described in the post on Miketz) to 70 elements. There are 4 stellations (or points) on each of the tetrahedrons of the star after the subdivision (see the pictures below).


View of a Star Tetrahedron from the Top
Click to Enlarge 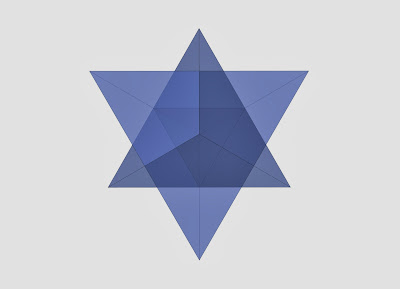 In the meantime, the number of elements resulting from the division is calculated as follows. The subdivision results in 4 tetrahedrons that are half the size of the original, and 1 octahedron in the middle. A single tetrahedron is made up of 4 faces, 4 points (8 elements). The 4 tetrahedrons together thus have 16 faces and 16 points (32 elements). The octahedron in the center has 8 faces and 6 points (14 elements). The lines that cause the division (from the intersection) are one-dimensional and should not be counted twice (as separate elements on each of the resulting geometrics). Therefore the number of lines equals 4 x 6 or 24. The 24 lines together with the 22 points and 24 faces equals 70 elements. The stellations, or points on the star (4 on each) can be further subdivided in like manner, the result being a star tetrahedron with 2 tetrahedrons, each with 4 stellations having 70 elements, with a total of 72 triangular corners that geometrically reflect the 216 letters of God's Explicit Name in their triad form. It also appears in the tetrahedral geometry of the stone where each of the 4 triangular faces is divided by 7 lines of division (between each handbreadth of its measurement) with each of the 7 points of intersection on the line having 10 vectors (70) in five-dimensional space (the ten vectors of those five dimensions being enumerated in sefer yetzirah).

Note also (below) that a two-dimensional magen david can be seen in the orthographic projection of just one tetrahedron so divided.

The important thing to remember is that God’s Name is imprinted (mathematically and geometrically) on every aspect of time and within every dimension of physical space in His creation, as well as the intrinsic characteristics of things Jewish.