The Mem-Tet Angel and the Stone(s)

As a general rule of thumb, many do not pronounce the name of the Mem-Tet angel (MeTatron). What exactly is mem-tet? How does one approach this level? What does it mean to be mem-tet?

Enoch never died. One day he just "ascended" and became (the angel) known as metatron. Enoch/metatron ‘returned’ many years later as Elijah the Prophet (Eliyahu HaNavi was the gilgul of Enoch). Just as Chanoch never died, so too, Eliyahu (with that portion of Adam's soul) never died. Both simply ascended, as is known. Death was/is “done away with” at this level of consciousness (when metatron is present). The word "consciousness" here denotes one’s knowledge, understanding and attachment to God['s Name].

Metatron guards the throne from those who are unworthy. The "stone" of the mem-tet angel (a unique reflection/perception of reality) is also well known. This is the stone that was divided by Moshe and brought down as the shnei luchot (two tablets). When the measured geometric nature of this "stone" is contemplated in order to attach oneself to the Holy One of Israel, it is sometimes referred to as the cube of metatron. Quite literally, it is a geometric representation of a mathematic system at the very heart of creation; the geometric template for our physical reality; the penultimate facet of understanding that is required of man, before man is allowed to "know" the Name of his Creator.

The name "metatron" may be spelled two different ways in Hebrew. One spelling consists of six letters and the other consists of seven letters. This should come as no surprise since the measure of the luchot (the cube of the mem-tet angel) can be expressed in terms of its linear handbreadths as six-cubed, and in terms of its points of intersection, as seven-cubed (each dimension measures six handbreadths). These in turn, are connected to their adjacent handbreadths by seven points of intersection.

This is how we measure the original foundation stone (before duality was established to create the physical universe). It is also how we measure the dual nature of its post-creation counterpart that was divided and brought down by Moshe. Hidden within its measurement is the signature geometry that hides the Name of the Creator from mankind. It is the mem-tet angel who guards these secrets.

The letters of the name “MeTatRon” are related to the word “MeaSuRe” as in "to calculate and assess.” We know this because its root letters Mem-Tet-Resh are those of the word MeTRon  which actually means "to MeaSuRe" as in the MeaSuRe of a MeTeR in the MeTRic system of MeaSuRement. All of these words and their root letters have an obvious connection. Hebrew, by the way, has been shown to be the linguistic common denominator between other languages and the three root letters of any given word often surface in related words with minor variations. You might say they are shadows of their Hebrew counterparts, a step or two removed from lashon hakodesh (the holy tongue) as seen in the above example. Letters, and the words they create, are the very substance of human consciousness.

Metatron is known as “the master of wings” owing to his knowledge of God's Name (essentially his proximity to God). The wings are the triplets (letters) and the triplets are the three handbreadths (measure) resulting from the division of the evan shetiyah (stone). Understand this. What is the “measure” of the original undivided cubic form of the luchot? In two dimensions it may be expressed mathematically as six-squared (six one-dimensional linear handbreadths) or seven squared (seven zero-dimensional points of intersection). 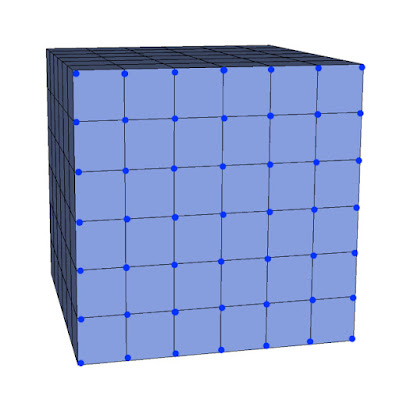 (49 Points of Intersection)
(49 Gates of Understanding)


The first two letters of metatron have a gematria of 49. If you gaze into the geometry of the foundation stone, you will note that each face has 49 points of intersection between each linear handbreadth.

Divide this cube in half and the result is a measured model of the physical universe characterized by this "duality."  In the physical universe (having three spatial dimensions) one can only see two large faces of the luchot at any one time. The first and second letter of the name metatron (MT) have a gematira of 49, and the first and third letters of metatron (also MT) are 49.  Just as these two pairs of letters have a gematria of 49, so too, each of the two large faces has 49 points of intersection. 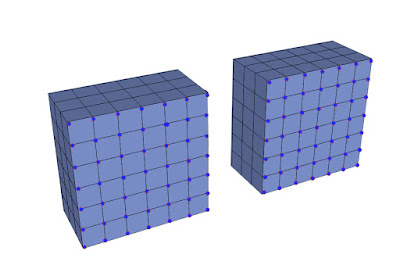 The gematria of metatron (מטטרון) is 314  (mem = 40, tet = 9, another tet = 9, resh = 200, vav = 6, and nun-sofit = 50, for a total of 314). The letter tet is in the form of twins (טט) and alludes to the sapphire twins (luchot) resulting from the division of the stone (also known as the cube of metatron. The first two letters of metatron (מט) have a gematria of 49, which mathematically parallels the points of intersection on each face above (49). The remaining letters have a gematria of 265, which is the sum of another 49 (which is like the gematria of the mem with the second tet). The points of intersection delineating both faces above are thus: 49 + 49 and when added to the volumetric measure of the two tablets (216) the sum is equal to the gematria of metatron (314).

You may recall, for example, the post on the 42 Letters in Sapphire that was about the 42 letter Name, where we referenced the 42 specific journeys in the wilderness (corresponding to the 42 sets of 42 linear handbreadths between each point of intersection). The account of these "journeys" just happens to be conveyed in a series of 49 thoughts that are logically divided into 49 verses (BaMidbar 33:1 - 49). To refresh your memory, the gematria of the Hebrew phrase for "these are the [42] journeys" is 216 and each is described in these 49 thoughts/verses. Look at the geometry and you will see the 42 linear handbreadths "within" the 49 points of intersection of each face. You will also see the 216 cubic handbreadths "inside" the 216 square handbreadths of its "outer" surface.

The geometry is the origin of its counterparts in the physical universe. The journeys are merely another reflection of this geometry. The StoRy (SiPpuR) that is in the SapPhiRe (SaPiR) is expressed in the letters, words and sentences of the Torah, which are just as much a part of the geometry, as seen in the 49 thoughts. Reflect on sefer yetzirah 1:1, where He created with three books...

“He created His universe
...with three books (SePhaRim)

...with text [SePheR]
...with number [SePhaR]
…and with story (communication) [SiPpuR]

These three 'books' allude to the three dimensions of the primordial torah that was made of SaPphiRe. The root letters of all these Hebrew words describing the substance of its geometry (shown above in blue) should be carefully contemplated as they relate to God's Name. The StoRy is indeed "in the SapPhiRe" ("the SipPuR is in the SaPiR").

The letters of the name metatron are a mathematic and geometric facet of the foundation stone, which is in turn a facet of the Explicit Name (this led at least one sage to errantly conclude that metatron was an independent deity, rather than a lofty reflection of the Creator that results from a knowledge of His Name). In truth, as we said in the first few paragraphs, metatron is that part of Adam's soul that fled before he sinned in gan eden.

If you want to know God's Name, and understand the nature of what He created, then learn the name of the mem-tet angel. Consider for example its paired letters (MT TR ON / מט טר ון ).

The first two letters of metatron (MT / mem-tet) as previously stated, have a gematria of 49. The letters are "the 49 gates of understanding" (ARI). They also happen to correspond to the geometry of each face on "the cube of metatron" (a measured aspect of the mathematic nature of the universe).

These letters are related to the marriage of two Names: YHVH (yud-key-vav-key) and Ehyeh (aleph-dalet-nun-yud). When these letters are intertwined/married, they become YAHHVYHH (YA HH VY HH). The double-double "heh" (HH) ( הה ) is the letter "origin" of the two tablets (shnei luchot) that were brought down twice. The gematria of heh (H) is five. The ten commandments on two tablets brought down twice are 5+5 (the tablets that were shattered) and then 5+5 (the tablets that were received) or HH followed by another HH. You will see in a moment a missing pair of letters (HH) that correspond to the tablets (5+5) that were shattered. The connection between the Name; the gematria of its letters; the geometry of the stones; and the historical event(s) that are part of our physical reality should be carefully contemplated.

This connection runs deeper than you might expect. The gematria of YHVH (yud-key-vav-key) is 26 and the gematria of Ehyeh is 21 (we examined this as a function of the geometry for the evan shetiyah in the post on "The Name in the Stone"). The sum (gematria) of the marriage between these Names is 47 + 2 (for the two Names) or 49 (as is known). This is mem-tet (49) the face of the evan shetiyah (49 points of intersection / 49 gates of understanding) as an aspect of YHVH and Ehyeh.

The second pair of letters in the name of metatron are TR (tet-resh). The TR correspond to the Names YHVH and Elohim (ARI). When these are married they are intertwined like this: YAHHVHHYM and YAHDVNHY. The gematria of these letters is 203, added to the 6 (the first six letters of YHVH and Ehyeh above: YAHHVY) makes the total 209. Did you notice that one couple (one pair of letters) was missing? The "couple" missing from those six letters is the HH we just mentioned. These relate to the last two letters of the mem-tet angel. How?

The third and last two letters of the name of metatron (ON / vav-nun) correlate with the mystery of judgement (metatron is the one who "measures," and measurement is the ultimate form of judgement).

There are five strengths of judgement. These parallel the five letters of the hebrew aleph-bet with dual form: MNTzPKh ( םןץףך / מנצפכ )(5 opposite 5). You may remember from a number of other posts that the foundation stone consists of five unique mathematic constructs that exist in dual form (5 opposite 5). Here we see the geometry of the letters as they pertain to the geometry of the luchot (5 opposite 5) which in turn correlate, not only with the Name of God, but also with the name of the mem-tet angel. The last two letters of metatron (ON) have a gematria of 56. The combined gematria of the five letters that exist in dual form is 280, which happens to be 5 x 56. Contemplate this carefully. The five strengths of judgement (the counterpart of judgement is mercy) are mirrored in the five letters (which stand opposite their counterparts) and the five constructs in the geometry of the evan shetiyah, or "cube of metatron" (which stand opposite their five counterparts). Each is a reflection of a larger reality that is shaped by the letters of God's Explicit Name, as in the double HH (5/5) that is either missing or present (like the luchot (5/5) that were either withheld or received). The letters of the mem-tet angel provide a common denominator (a path) that allow us to perceive this larger reality (involving God's Name) as it pertains to the stones (the mathematic system that is the specifically measured template for the created universe).

This concludes our essay on the mem-tet angel and the stone(s). The next construct is: "Every Second Counts"