We are told in Parashah Mishpatim (Exodus: 24:10) that Moshe beheld the throne of God: "...and under His feet was something like sapphire brick(work)"  This unusual object is later divided into two separate 'stones' and brought down as the shnei luchot (or 'two tablets' of the covenant).

In Jewish sources, Moses is said to have remained in the cloud for 6 days; brought the letters of the Torah back and forth to the people for 6 days; and that this either began on the 6th of Sivan or ended on the 6th of Sivan depending on the source. This alludes to the three dimensions of its combined cubic form (6 x 6 x 6 handbreadths).

The same allusion is hidden in the 3 'measures' of flour that were each 6 ounces in Parashah VaYera when Avraham attends to certain visitors. It is also hidden in the three wool threads with 6 strands in the garments of the Cohen HaGadol (High Priest). In each case, these three 'measures' of 6 allude to the ratio and measurement of the (sapphire) cube [of creation] in handbreadths, that would eventually be divided and brought down as the luchot (the measurements of the stone or stones being the "foundation" of the universe).  The three 'measures' are mentioned elsewhere, and have additional significance.

Sefer Yetzirah 1:1 “He created His universe
...with three books (SePhaRim)

...with text [SePheR]
...with number [SePhaR]
…and with story (communication) [SiPpuR]

These three 'books' allude to the three dimensions of the primordial torah that was made of SaPphiRe. The root letters of all these Hebrew words describing the substance of its geometry (shown above in blue) should not go unnoticed.

A matrix with a ratio of 6 x 6 x 6 is a 'measured' cube with a total of 216 elements. This is also the number of letters in the Triad Havaya of 72 or Explicit Name which is hidden in a contiguous string of letters in the Torah. The string nevertheless conveys three thoughts, and is thus divided into three sentences that each just happen to have 72 (Hebrew) letters: 72 + 72 + 72 = 216 (a one-dimensional string that alludes to a second dimension by virtue of its segmentation).

When these letters are permuted into triplets, as is known, they do in fact become two dimensional: 72 x 3 (216) where the first dimension is 72 and the second is 3.  Of course, it does not end with two dimensions. You will see how it takes form in the third dimension in the next construct.

This sapphire cube is also known as the evan shetiyah or foundation stone1, as it is quite literally, the mathematic "foundation" of the universe (this is proven beyond reasonable doubt in the construct on "the primordial torah). Insofar as its geometry is concerned, each of those elements is a cubic handbreadth, and so its total volumetric measure was/is equal to 216 cubic handbreadths. The 'measure' is a mathematic or geometric reflection of the letters that define it's existence. The elements of the cube and its specific measure (as a function of the letters in the Name) are quite literally the basic building blocks in the chemistry of creation. This assertion will also be proven beyond a reasonable doubt in the seventh essential construct on "the primordial torah".

In sefer hekhalot (the book of palaces) by Rabbi Ishmael, the triplets of this Name (each group of three letters) are associated with the geometry of the luchot and referred to as "wings" that are given to the sage by the 'Mem-Tet' angel (MeTatRon). The word "MeTRon," by the way, means "a measure," as in "to measure" or "judge" those who think themselves worthy of approaching the throne (as Moshe did). It is also the origin of the word 'MeTRic' and MeTeR, as in the system of measurement, or MeTRonome which is an instrument that measures.

In the meantime, a representation of the cube is pictured below to give you an idea of its three dimensional geometry and its measurement in terms of cubic handbreadths. For now, just keep in mind that there are 216 elements in a matrix with a ratio of 6 x 6 x 6, and that in the case of "the cube" [of creation](shnei luchot ~ two tablets) it's volumetric measure is a mathematic function of the letters in  God's Name.

As you can see from the above, there is more to this particular cube than meets the eye. In closing we would only add that when Yoseph was imprisoned in Egypt, he meditated on the nature of this stone, and the mathematic system hidden within the measure of its unique properties, that in sum, define the underlying foundation of the universe. Thus it says "to Yoseph were given the garments of Adam" (Bereishit Rabbah, Targum Yerushalami). The pages listed to the right provide insight into the reason that Yoseph received this mantle, and engaged in such meditation.

The next essential construct is on: The Sapphire Twins 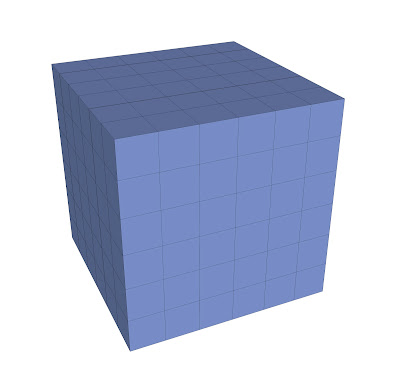 Footnote 1 - Some sources indicate the the foundation stone is a large bedrock structure on the temple mount. The foundation stone was in fact on the temple mount, in the holy of holies, when the luchot were in the ark (during beit rishon). However, the bedrock structure was not the stone in question. This will become apparent (proven beyond reasonable doubt) as you read through the essential constructs, and see how the measured geometry of this unique "stone" defines the physical properties of the universe. It is the measure of this stone that is the mathematic "foundation" of the universe (quite literally its foundation stone).