If you’ve read each of the previous essential constructs in the order listed, then you know that the evan shetiyah (foundation stone) is the primordial form of the luchot habrit (tablets of the covenant) that were brought down by Moshe, and that its measured geometry is the mathematic template for the physical universe.

Yes, the luchot were physical and the texts can be taken literally. However, if you think of the stone or stones as mere physical objects you are missing the point. Their measured geometry is quite literally the foundation of the world along with every aspect of physics, be it related to quantum mechanics, string theory; or things like celestial dynamics; even biology and chemistry. All invariably trace back to some measured aspect of the stone and thus to one of God’s Names, and more specifically, the Triad Havayah of 72 (216 letters) or its geometric counterpart in the 42 letter Name, as shown in posts like the "Primordial Torah" and the “42 Letters in Sapphire."

It therefore goes without saying that we should be able to find what is called the fine-structure constant (symbolized by the Greek letter alpha: 𝛂) somewhere in the physical measurements of the stone. For those who don’t know what this is, it is a physical constant that characterizes the strength of electromagnetic interaction between elementary charged particles. It has the approximate value of 1/137 in all systems of measurement and it is, for lack of a better explanation, a kind of common denominator between many different aspects of the physical universe.

The fine-structure constant is shown in the following formulae (one of several) where you will see such things as the speed of light, Pi, the elementary charge, reduced Planck Constant etc.

Please take a moment to find the three instances of Pi in the above formulae. In the next essential construct (which is entitled "Fixed in Stone") you will see three instances of Pi in the measurement of the evan shetiyah as well. One is related to a specific metric unit of measure, one to an imperial unit of measure, and one pertains to its volumetric measure, a most curious phenomena.

At any rate, the most precise value of the fine-structure constant so far obtained (as of 2012) is based on a measurement obtained from what is called a quantum cyclotron. That measurement equates to 1 divided by 137.035000173. The result is .0072 (to the 4th decimal place). This should not go unnoticed as it reflects the number and nature of the letters in God’s Name in the form of the Triad Havayah of 72 (previously mentioned). It would be foolish to assume this was a coincidence.

The measurement is actually much easier to obtain simply by understanding the nature of the stone's geometry as it relates to the letters of God’s Name. The "stone” is three-dimensional in scope and volumetrically equal to 1 royal or sacred cubit-cubed. Its 6 faces mathematically/geometrically define a sphere within (a simple mathematic fact) and that sphere has a volumetric measure of .523598775598167 cubic-cubits. When the stone is divided in half (as the nature of the universe was divided when God established its duality) the sphere is likewise divided into two hemispheres (two luchot each with a hemisphere equal to half of the original sphere defined by the six faces). The volume of a hemisphere is in this case:

The division of the foundation stone, by the way, can be seen in parallel events like Moshe dividing the “sapphire brickwork” from “under the throne” and bringing it down as the luchot (two tablets) with 10 commandments (5 opposite 5); or the 10 spherot in a single column returning in two columns (5 opposite 5) etc. These are real-world reflections of the five-duals within the foundation stone, where the internal and external measurement have a connection to the letters of the Name and provide the penultimate key to understanding. Contemplate this carefully. The mathematic nature of the stone is quite literally the template for reality as repeatedly demonstrated in posts like “String Theory and the Luchot; the Speed of Light; and the E-8 Lattice” etc. 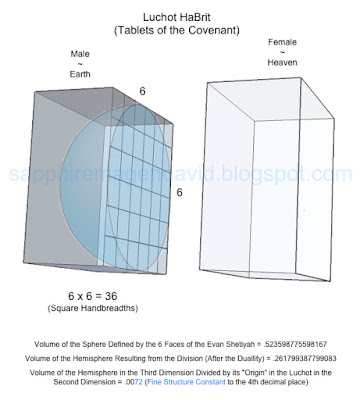 Is there really a variance? Perhaps. You may remember that God cursed the earth/soil (a metaphor for the physical universe) so that man would find it necessary to toil and work in order to grow his food and survive. The curse also brought about  premature aging and eventual death. The sages of Israel said that, were it not for the curse, edible things would grow abundantly and even the bark of trees could be consumed. This brings us to what is called Cosmic Background Radiation or Cosmic Microwave Background (CMB).

Physicists are keenly aware of the electromagnetic radiation that is a remnant of the big bang (sometimes called relic radiation). Radiation has a deleterious effect on any number of living things. The shielding you have in your microwave should come to mind, as well as its effect on anything you "cook" inside. Could this background radiation be the real-world equivalent of "the curse" that effects organic material? It is a very real possibility!

The next construct is an explanation of why there are 360 degrees in a circle and how this measurement correlates with the Name of God: The 360 Degrees in a Circle