As you read this blog, you will find numerous examples and see how certain measures have specific significance. The purpose of this page is merely to provide the reader with an introduction, so that the posts will be easier to understand.

In Torah, there is a unit of measure that is called an ephah. It happens that 1 ephah is equal in volume to 72 lugim, which is the number of triplets in the Triad Havaya. 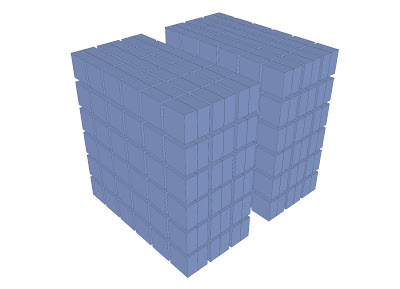 Let’s now return to our ephah (above) that has the same volume as 72 lugim. Those lugim can be further divided into another unit of measurement called an egg. How many eggs are in 72 lugim? There just happen to be 432 eggs in 72 lugim, so we can immediately begin to see a connection. But how extensive is this connection? How deep does it go?

An "egg" can be further divided into even smaller units of measurement. Those units are sometimes referred to as drams, dates, olives or grogeret. However, the most important fractions for purpose of division, are those that correspond to the measurements of the luchot in terms of handbreadths. Its division into two halves defines the primary fractional proportion of 1/2. Since the luchot are volumetrically 108 cubic handbreadths, the gematria of the word "chatzei" (the Hebrew word for "half") is also 108. Each tablet was/is 6 handbreadths by 6 handbreadths, so each handbreadth is 1/6th of the total measurement. Along the side of division, each of the luchot measures 3 handbreadths, so on this side each handbreadth is 1/3 of the measure/length. These 3 fractional proportions figure prominently in other units measurements, like eggs.

Rabbi Culi, in Me’am Loez refers to 1/6th of an egg as a dram (we’ll provide specifics in a moment). Rabbeinu Yitzchak defines a “ke’zayit” (olive) as one half of an egg, and the RamBam defines a “grogeret” (dried fig) as one third of an egg. Whatever you call it, there are 3 of these 1/3rd units in the measure of an egg. That means the amount, or total number of  “thirds” in 72 eggs, is 216 (3 x 72 = 216) which is of course the total number of letters in the Explicit Name, and also the specific ratio of its triad components one to another.

Just as 1/2 of an egg is slightly larger than 1/3 of an egg, so too, a biblical "olive" is slightly larger than a  "dried fig." So if a grogeret can be used to describe 1/3 of an egg then an olive could be used to describe 1/2 of an egg. Interestingly enough, the 1/2 measure of an egg (whatever you choose to call it) also has a connection to God's Name. Start with one half of an ephah, for example, which is 36 lugim, and this in turn is 216 eggs, another clear reflection of the letters in the Name. When you further divide an egg in half (like we divided the ephah in half for the purpose of this example) you get 432 of these half measures (2 x 216 = 432) which is the number of half-cubic-handbreadths in the luchot as previously mentioned.

If the term "grogeret" was considered appropriate by the RamBam to describe the 1/3 measure of an egg, then the term "olive" no less appropriate for 1/2 of an egg. The name of the unit however, really doesn't matter. What matters is that the fractional proportion itself, with respect to the larger units of measure, reflects the mathematic and geometric characteristics of both the luchot and the Name. And not only are the various systems of measurement a reflection of the letters, but the 1/3 measure is also a reflection of the triad nature of those letters, grouped together as triplets (as we described in Hashem HaMeforash).

Are these units of measure determined by real olives or eggs? The answer is no. Real olives and eggs vary in size. A unit of measure cannot vary. If it did, then there would be chaos. There would be no “honest hin,” or any other honest measure. If you purchased 5 pounds of steak from a vendor for $30, for example, and the vendor gave you only 4 pounds, you would probably be upset with the vendor. If the vendor told you his “pounds” were different from your “pounds” you’d have a problem with that. And naturally so, because units of measure have to be static. If you were building a house and you needed, and then purchased a piece of wood that was 4 meters long, and the lumber yard showed up with one that was only 3.5 meters long, it might fall short of what you need. Without uniform systems of measurement there would be mayhem.

The problem with eggs and olives is that not all eggs and olives are the same. Or are they? What if the volume that is called an egg, has nothing to do with a chicken? What if it’s actually a very precise unit of measure equal to the volume of a sphere inscribed within a certain cube, or the spherical ellipse (egg shaped sphere) inscribed within 1/2 of that cube? The volume would then be .5236 (actually pi divided by 6) times the volume of the cube that surrounds it (or 1/2 in the case of 1/2 the cube). Then the measurement of the egg would be completely static and never vary. That would mean that its fractional proportions like 1/2 an egg or 1/3 an egg, or 1/6 of an egg would also be static. Now all we have to do is give these fractional portions names. How about olives, grogerets or drams?

We mentioned before that Rabbi Culi in Me’am Loez describes a hin as 432 drams (although keep in mind that there are ‘different’ drams in use today). It is likely that all modern variants of the dram are a distortion of the original biblical measure derived as explained above. Generally, a dram is just under 4 cubic centimeters, and so its about the same as two grogeret. For this reason, and for the purpose of this blog, we will accept Rabbi Culi’s nomenclature, and will henceforth refer to this unit of measure as a dram.

Since there is some debate, you are free to use whatever name you prefer. Just keep in mind that there are 432 drams in a hin, 216 in a half hin, and 108 in a quarter hin, and that the various ratios have a direct connection to the letters of the Architect’s Signature, as well as how those letters are combined in their triad form.

For additional information on the unit/concept known as an egg, and to see how it is related to string theory, gravity, and the physics of E8, see the post on Shemeni and Tzaria.

You can read the next advanced construct here: The Eight Dimensions
______

Footnote 1 - RamBam equates an olive to roughly 1/3 of an egg, although it would be more accurate to say that a 1/3 of an egg is roughly equal to the size of an olive. There is a difference. One is an approximation. The other is a static measurement. Some contend that there are 2 olives in an egg. Although, it would be more appropriate to call the larger fractional proportion (which is 1/2 an egg) a "date." However, regardless which opinion is correct, whether it equates to one thing or the other, is largely irrelevant, because there is still a unit of measure that is 1/3 of an "egg," and a measure that is 1/6 of an egg, and the connection that both of these ratios have to the luchot and God's Name remains intact.

Footnote 2 - When Torah Scholars debate the size of an egg or olive, it is for the purpose of halachic requirement (which is necessary). There is much debate in rabbinic circles as to the exact meaning of the amount within the smaller units of measure known as dates and olives for purpose of these requirements, and so there are numerous opinions. Which opinion is accepted is largely a matter of personal choice. And whether we choose to call it a date or an olive, is also a matter of personal choice. It is the specific volume or fractional proportion itself, that is the unit of measure, and those proportions are fixed in stone (gem-stone to be exact). The practical applications of those measures is a different story, hence the debate.