The Marriage of the Letters

Throughout this blog we demonstrate how the letters of these abbreviations form the template for a larger reality that is hidden just beneath the surface of various events described in the Torah. The same letters however, are also the template for the physics of time and space, quantum mechanics, biology and chemistry to name a few. Each is discussed at the appropriate time in an applicable post.

In the meantime, it is important to understand that the "marriage" of the above letters during for example the prayer, is what gives the soul a window into this larger reality above, allowing it to perceive the perfect unity behind the scenes. That unity remains hidden below where its shadow can only be perceived as a 'division' between the male and female halves of the physical universe (duality).

The blueprint for this male~female division is the luchot. Before division, it was characterized in combined cubic form by a volumetric measure of 216 cubic handbreadths (the letters are unified). After the division, each half becomes '108' (the 'measure' of the letters defines the 'measure' of the luchot in cubic handbreadths). The gematria of the word "half" is 108. Each aspect reflects this larger reality that is entirely dependent on the letters of the Explicit Name. The primal 'division' of the letters forms the basis for the entire physical and non-physical universe, as explained in our post on the Primordial Torah. Each half is a limited or partial reflection of the 216 letters in God's Explicit Name, as are its many abbreviated forms, such as those that are 'married' during the above mentioned unification. These letters in turn 'rule' over a universe having specific male~female characteristics (the letters themselves being a representation of the primordial forces to which all matter is subject, like those in quantum mechanics).

The number and nature of these letters, in one form or another, constitute the mathematic and/or geometric Signature of the Architect Who created the system. This signature is invariably hidden beneath the surface of events described in the written Torah, and even the linguistic structure of the text itself. Moreover, as we said above, it is also hidden beneath the surface of just about everything else in the universe as well. Prime examples can be found in the speed of light and human DNA to name just a few.

This post is specifically about the marriage of the letters in the abbreviated forms of this Name that are 4 opposite 4, as shown below, from left to right (as they would appear in English) as opposed to their natural order, from right to left form (as they are in Hebrew).

The marriage results in the Name Ehyeh as is known:

This abbreviated form of the Name (Ehyeh) and how it is derived is a subject that is not generally discussed, not because it is prohibited, but because of the lofty nature of the concept that most find difficult to understand. It is provided here for those who wish to learn as much about God's Name as possible. We recommend that you try to understand and contemplate what is said, if for no other reason than the fulfillment of what was told to the Baal Shem Tov: "when the people do unification's as you do, then will mashiach come." In order to more fully appreciate the significance of the letters in God's Name (which will hasten this event) we will explain the unification, which is generally visualized as eight letters side-by-side (yud-aleph  hey-dalet  vav-nun  hey-yud) rather than in the composite form of Ehyeh (aleph-hey-yud-hey).

As we indicated above, the "marriage" of the above letters is visualized during the four bows. Although we perceive the "marriage" (unification) elsewhere as well, such as the 4 strands opposite 4 strands of tzitzith on the 4 corners of the talith, as explained in our post on Parashah Ki Thetze, and also in the 12-letter variation, as the 12 stones opposite 12 stones on the banks of the Yarden (Jordan River) and the 12 stones in the middle, as explained in our post on Ki Thavo. A reflection of all these abbreviations (4 opposite 4 and 12 opposite 12) can be seen in the mathematic and geometric characteristics of the cosmic blueprint (combined cubic form of the luchot) in the static aspects of it's internal tetrahedral geometry: 4 large triangular faces opposite 4 large triangular faces that form 4 large magen davids ~ and 12 small triangular faces opposite 12 small triangular faces that form 12 small magen davids, the end result being 72 triangular corners in the third iteration of the division. The signature geometry is hidden in this singularly unique metric that is a constant within the mathematic dynamics of the shnei luchot ('cube' [of creation] or primordial torah). It is this tetrahedral 'geometry,' together with its polar opposite (male opposite female) that casts a two-dimensional shadow known as a magen david and forms for lack of a better term, the 'royal seal' of the Blessed Holy One.

To 'perform' the unification properly, it is important (as with all mitzvoth) to know and understand God's Name, which is by the way, the purpose of this blog. Normally, during each bow, one pair of letters is "married" by mentally envisioning them coming together side-by-side. Some prayer books actually have the "pairs' written this way as a sequence. However, there is more to the story. To understand the rest of the story, we first have to explain what the letters are.

Our sages said that the letters of creation are the primordial energy or "substance" of the universe. They only appear to us as letters (or we represent them as letters) due to our limited ability to perceive reality. Just like protons, neutrons and electrons remain unseen, sub-atomic particles form atoms that have "substance" which comes together to create a physical universe that we can see. On a smaller level, the vibrating strands of primordial energy, represented by those 22 letters, are what create. Since there are five internal mathematic constructs in dual form, within the combined cubic form of the luchot, everything else in the universe conforms to this specification. The letters giving rise to 'creation' mirror this specification and so we find that five (Hebrew) letters exist in dual form. These in turn give rise to the vibrating strands of energy (in physics) that we just mentioned above. That's why there are five string theories reconciled by dual resonance in quantum chromodynamics. The Name defines the blueprint (luchot) that in turn defines creative force (letters) that in turn define reality. These letters come together to form words and sentences (more complex constructs) that create ideas in "the world of thought" (yetzirah). These in turn (can and do) physically manifest in the "world of action" (asiyah). The letters of a name (any name) are no different. They combine and define. Since we're looking at the primary letters in the abbreviation of God's Name, we'll need to look at how they combine and what happens when they do. 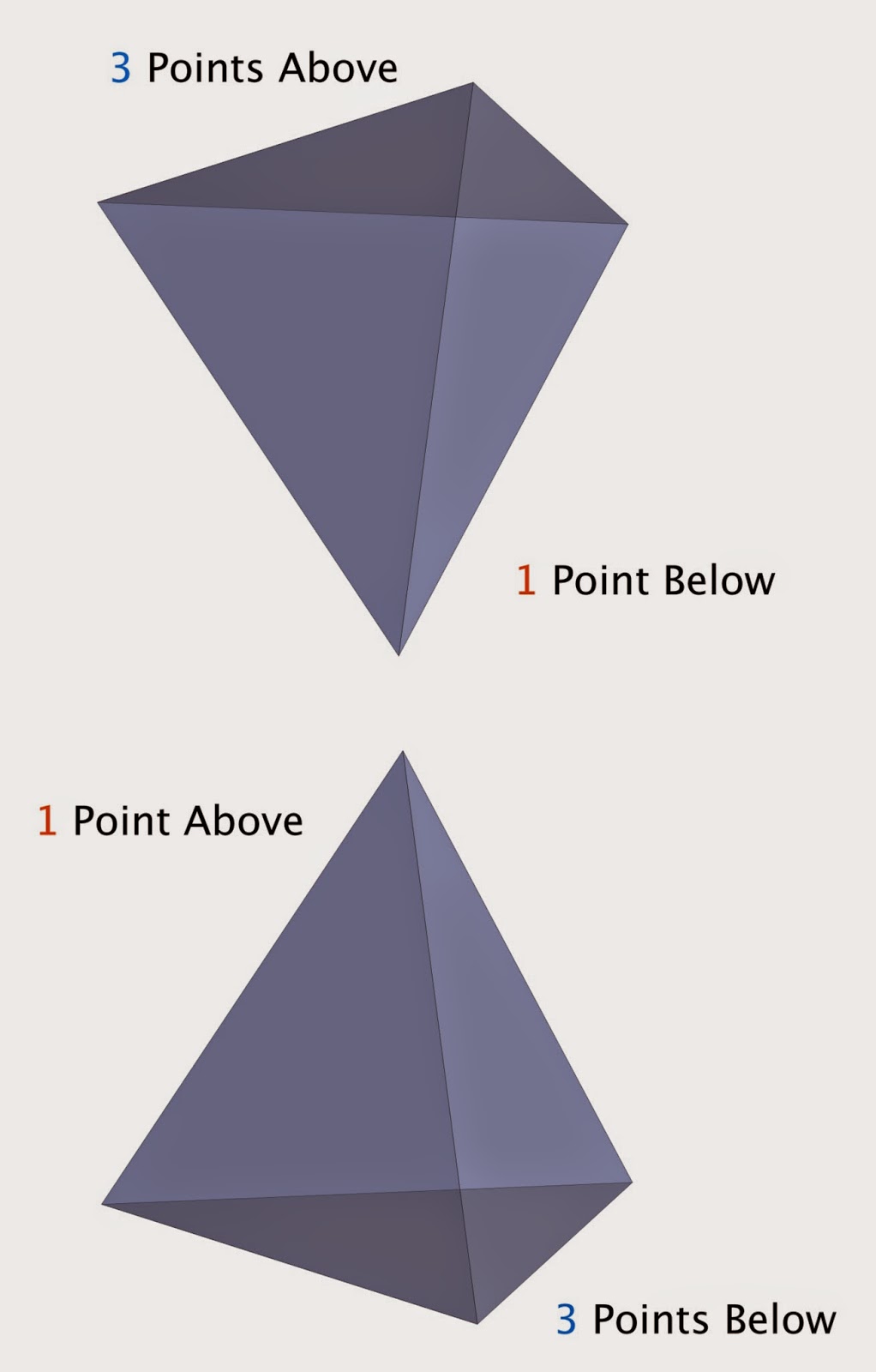 The marriage of these four letters and their four counterparts, is the underlying basis for the four forces in quantum mechanics, and the four dimensions of the observable universe. These concepts are discussed in posts like Balak, VaYishlach, Ki Thetze and also the advanced construct on the Eight Dimensions. We refer to God as 'Elohim', a term that breaks down into 'El' (referring to God) or 'Master' over the "forces" of nature (plural). What are the four forces of nature? They are the four forces in quantum mechanics that "rule" the universe. What are the four forces? They are merely a reflection of a larger reality in the four letters (primordial forces) that are an abbreviation for the fully expanded Explicit Name.

The twelve letter abbreviation is an expansion of the four, but both are found in tetrahedral 'geometry' as well, for example, the four letters of Ehyeh create twelve (12) houses (or permutations). The same is true of the four letters in the Tetragrammaton (Y-H-W-H) but the four letters of Adnoot (A-D-N-I) create twenty-four (24) houses. The former create only twelve, because one of the letters is duplicated (there are two Heh's in these particular abbreviations) and so the number of permutations is reduced accordingly. The latter, however (A-D-N-I) creates twenty-four because all four letters are different, so 12 opposite 12 (or 24) becomes 12. The four letters are thus a shadow of the twelve letters that are in turn a shadow of the 216 letters. The 12 are also three times their four-letter counterparts. This is where the twelve letter abbreviation(s) converge with the 4 letter abbreviation(s) and why they are both found in the geometry of the royal seal (or three-dimensional magen david) which consists of four faces with three corners on two tetrahedrons. Each is a perfect geometric reflection of a letter, in either the four or the twelve (or all 216) that comprise the Name, depending only upon the place and position of the observer.

When the tetrahedrons (corresponding to these two aspects of the Explicit Name) are merged together in opposing directions and "marry" one another to create a star tetrahedron, the one subsumes the other (just like the four letters are subsumed by the opposing four letters on the composite form Ehyeh (which is aleph-hey-yud-hey) and the geometric result is twelve faces on one tetrahedron and twelve on the other (12 opposite 12) or 24 on both, exactly like the "houses" created by the permutations. You don't need to understand all of this to know God's Name, but it helps a great deal. One is simply a mathematic/geometric reflection of the other. It is worth taking the time to understand and contemplate the geometry, because if you understand the geometry, then the relationship between the Names and the Explicit Name can be perceived with greater clarity, and the degree to which they 'rule' the universe more fully appreciated.

As you might suspect, there are additional yichudim (unifications) involving the marriage of letters in God's Name(s) that are beyond the scope of this post. These too, have a connection to the 'measured' geometry of the shnei luchot defined by the letters of God's Name. At some future time we may delve into these as well.

You can read another of the advanced constructs here: Duality and the Letters of the Name