In the last post on the Seven Eyes of God, we explained that the measure of the shnei luchot in handbreadths was determined by the natural ratio between the six surfaces of its combined cubic form and the one surface on the sphere within. The linear measure of one cubit thus becomes six 'handbreadths' (in essence the 'Hand' of God behind the mathematic nature of His Creation). If you have not yet read the page on the Seven Eyes, it would be advisable to do so before proceeding.

Since a cube has six surfaces and a sphere has one surface, the ratio between the two is six-to-one. Together, the two geometric partners have seven surfaces. These seven, in this specific ratio, define many aspects of creation. There are seven days in a week: in six days God created, but then on the seventh He rested. Why? He “looked into the (primordial) Torah before He created,” and saw that it was good (i.e. a natural function of its geometry).

Of course any cube (of any given size) defines a sphere within, by virtue of its six surfaces. However, it is the physical properties of this specific cube (the mathematic system arising from its specific measure) that makes the foundation stone or combined cubic form of the luchot so special.

The natural marriage relationship between the cube and the sphere, together with the unique measure of the cubit-cubed, is at the heart of the universe which God created. This is why there are six handbreadths in a royal cubit. The ratio is not arbitrary. It is a function of this geometric marriage and its measurement is the primordial template for everything that follows. All of this was modeled in the post on the Seven Eyes of God.

We also mentioned in that post that there are five mathematic constructs in a cube and that each had a polar opposite. The constructs are generally recognized in their geometric form as the platonic solids (well known in geometry). However, when each is ‘measured’ according to the heavenly ratio of six-to-one, each is likewise delineated by the same seven lines that delineate the cube surrounding it.

We will here focus on the effect this has on the tetrahedron, because it is the dual (star) tetrahedron that casts a two-dimensional shadow known as a magen david. A tetrahedron so divided looks like this: 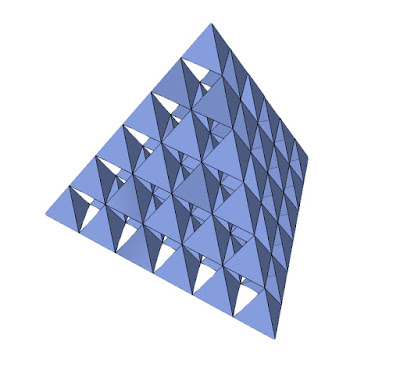 Notice that a tetrahedron 'so measured' and 'so divided,' creates a unique geometric system with many complex features. Please also notice that it consists of smaller tetrahedrons which are one-sixth the measure of the parent.

Regardless of our present three-dimensional perception of reality, its origins nevertheless trace back, from three, to two, to one dimension, before finally reducing to the quantum singularity from which the universe was derived/created, i.e. the Creator, Who, in perfect unity, cannot be limited by what we would call dimensionality.

We can however perceive the mathematic system that is the heart (lev) of His created universe in terms of the geometric nature of His foundation stone (evan shetiyah) and ultimately the luchot after division as explained in previous posts.

In the case of the foundation stone, the 7 points of the first dimension gives birth to eighty-four (84) unique points in the tetrahedral matrix of its third dimension (these points were graphically depicted in the previous post). It is here in the third dimension where all of the lines and faces of the many tetrahedrons converge.

When we add the 84 points from the third dimension to the 7 points of the dimension giving  rise to their existence, the result is 91 points. These geometric "points of light" can be more easily perceived in the gematria of the Holy One blessed be He and His Name [that] are One, that just happens to be 91 (the gematria of the Tetragrammaton/YHVH is twenty-six and the gematria of Adnoot/ADNY is sixty-five). The total is thus 91 (26 + 65 = 91).

Of course the five constructs within a cube each have a polar opposite. The opposite of the tetrahedron is another tetrahedron facing the opposite direction and both are characterized by these points. The two tetrahedrons within the cube [of creation] are juxtaposed in the model below. 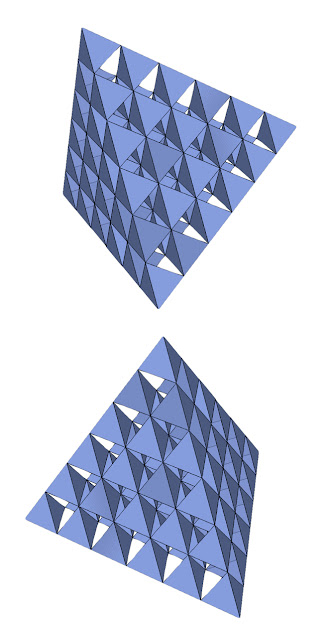 The ARI was well known for his yichudim (unifications) involving the letters of God’s Name. We won’t go into the reason for those yichudim in this post, although one of the more significant unifications is explained in the post on the marriage of the letters (listed among the advanced constructs).

Here it is sufficient to point out, that when we hear a blessing involving God’s Name, where YHWH is written but ADNY is said, we then say ‘Amen.’ The gematria of YHWH and ADNY is ninety-one, however, the gematria of Amen is also ninety-one, and so when a blessing is said in combination with Amen, the gematria of the letters involved, is ninety-one opposite ninety-one, just like its counterpart in the geometry of the (primordial) Torah, where ninety-one elements characterize the male half of the equation, and ninety-one the female half. The geometry is a reflection of this larger reality that revolves around God's Name. The yichud (unification) of the letters in the two Names, is a function of the male/female nature of that reality.

We’ve explained in a number of places, like the story of the cubit-cubed (another advanced construct) that when God created the universe He started with a single ‘point’ and engraved a space using the letters of His Name (Sefer Yetzirah 1:1). This resulted in a continuum of five dimensions. Those five dimensions have ten directions (well known in math and physics). We generally refer to them in this blog as five-opposite-five. The nature of these five dimensions and their ten directions are specifically enumerated in the Book of Creation (Sefer Yetzirah 1:5). For now, it is sufficient to know that our world, which started with a single point (a quantum singularity) provides for ‘movement’ in ten possible directions. These include: Up/Down; North/South; East/West; forward (or backward) in time; and Good/Evil (toward God or away from God).

When you add the ninety-one points of the male half with the ninety-one points of the female half, you have a total of one hundred eighty-two points. Each point (as an origin of ten directions) provides for 'movement' along 1820 possible 'directions' (182 x 10 = 1820) and so there are literally 1820 ‘paths’ (or 'potentials') within the three-dimensional 'magen david,’ that is defined by the geometry of the shnei luchot. In mathematics we would refer to these 'paths' as vectors. Either way, they are a function of the signature geometry of the Name in the foundation stone, that manifest themselves in the written Torah as well, where the Name (YHWH) is mentioned 1820 times (i.e. in effect signed 1820 times by the Author). Contemplate this carefully. The (mathematic) signature of the Creator or Name of God in number [SePhaR]) and in story [SiPpuR] as in the story of His creation, along with the history of his people (as recorded in the text of the written Torah [SePheR]) can be found quite literally within the geometry of the system.

We explained in one of the first essential constructs that “[God] created His universe with three books (SePhaRim) with text [SePheR] with number [SePhaR] and with story (communication) [SiPpuR] (Sefer Yetirah 1:1). These three 'books' allude to the three dimensions of the foundation stone that was made of SaPphiRe [SaPiR]. If you've read through the  essential constructs, then you already know that the root letters of these words allude to the connection between the geometry of the three-dimensional SaPphiRe cube [of creation] (luchot) and a much larger reality that is ultimately defined by the letters of God’s Name. Now you can see how the geometry manifests itself in the written Torah as well.

So we say "Shema Yisrael Hashem (91) Elohenu Hashem (91) Echad" ...and each time we say the Shema (where we see yud-key-vav-key but say aleph-dalet-nun-yud) our voice casts a mathematic shadow of ninety-one followed by another ninety-one, the total being 182(0) in the yichud (unification) of the letters defining this aspect of the signature geometry. In doing so our consciousness connects with the Name and our awareness of His Presence within us reaches ever higher levels. The sign on the road, should say "caution" there are "bumps ahead" as we navigate through life.

Is this really the signature geometry of our Creator's Name? When you divide the 1820 'paths' within the dual matrix of the stone and its magen david by seventy, you get the gematria of the Tetragrammaton (which is twenty-six) Why seventy? Seventy (ten 'sevens') are manifested in the geometry of the cube: five 'duals' (total ten) are delineated by the seven lines that define the measure of each dimension within the combined cubic form of the luchot. The twenty-six times seventy (1820) are an integral aspect of this geometry in the SaPphiRe foundation stone.

The unification of the geometry is modeled below. It's complex three-dimensional features conceal many mathematic mysteries of creation, some of which are discussed in posts like the primordial torah, string theory and the luchot, the E8 lattice, human DNA and so forth.

The Tetrahedral Matrix
of the Foundation Stone 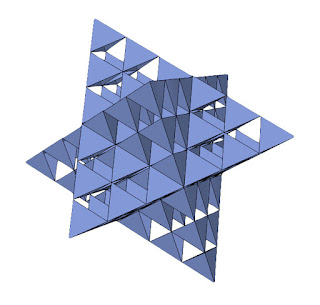 We conclude here, but remind readers that the Jewish people and the Nation of Israel are at the very center of this reality. More importantly, it is time for each nation to wake up and recognize the One True God; His Real Name; learn how that Name 'rules' over everything; and accept God's promise (to Israel) regarding its land inheritance.

This concludes the last essential construct in the list. If you would like to learn more, then you might begin by reading some of the more complex posts beginning with The one on the Mem-Tet Angel and the Stones. If you've not yet read the essential constructs then you should go back to the beginning and start with the Introduction.