The ARI revealed the significance of the seven Names in the "supernal stream." These Names are not only the origin of the physical universe but they are ultimately responsible for bringing about the rectification of human consciousness. This rectification includes an (eventual) awareness of a larger reality that can only be perceived by knowing God's Name. This requires an understanding of the mathematic system on which the universe is based, a system that corresponds to the measured geometry of the shnei luchot (two tablets).

The primordial origin of the seven Names in the supernal stream is the supernal "spring" which is the Name YAH (yud-heh). As it says in Sefer Yetzirah (1:1) "When God created the world He used the letters of His Name Yud-Heh" (YH) followed by "Yud-Key-Vav-Key" (YHWH). Its four expansions are the first four Names in "the stream."

The first two letters are the essence of the 'spring,' the primal source of all subsequent letters (beginning with the Tetragrammaton). One dimension thus expanded into three dimensions and eventually all five dimensions with ten directions mentioned in Sefer Yetzirah 1:5.

The supernal mikva (perhaps best perceived as the means to rectify the state of human consciousness) is fed by the waters of the supernal stream (knowledge of the Name) which is in turn fed by those of the supernal spring (the letters that began the process) as alluded to in the kavanot for the mikva advanced by the ARI through the writing of Chaim Vital. The subject is covered in such texts such as Pri Etz Chaim (the Fruit of the Tree of Life) and Shaar HaKavanot (Gate of the Kavanot).

This post will explain these concepts in their primal context and expand on the previous post which introduced "the Name inscribed in the [geometry of] the Stone" by exploring the balance of the Names in the supernal stream as they pertain to the same geometry.

We begin with a few more examples of the Havayah of AB, SAG, MAH and BEN (72, 63, 45 and 52) beginning with the Name having the smallest gematria (45) which is the Havayah of MAH. In the previous post, we saw this gematria in the geometry of the borders of any give tablet as shown here. 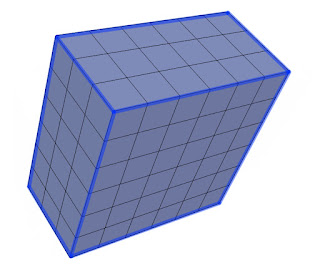 In the model below, you can see the same gematria in the measured geometry of any given small face. 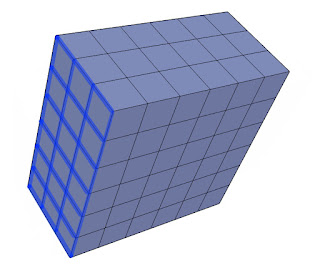 Note also, that there are  7 "layers" (like the face shown on the left of the above model) that are progressively further into the stone, running from the left face to the right face. This results in seven sets of 45 linear handbreadths. Take a moment to count them. These seven stand opposite another seven sets of 45 linear handbreadths on the opposing stone.

In the previous post we saw the Name with the gematria of 63 (the Havayah of SAG) in the measure of the linear handbreadths of the small side in combination with the large side as pictured here. 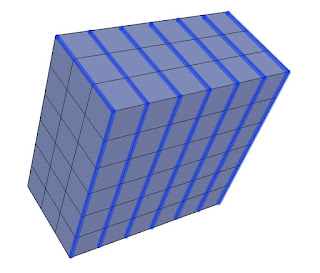 In the model below we see the same gematria in the measure of the linear handbreadths on any given small side in combination with all the square handbreadths they create. 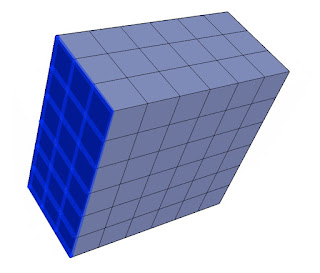 Note that this geometric feature also runs through the measure of the stones from the left to the right. There are again  7 "layers" (like the face shown on the left of the above model) that are run progressively further into the stone, from the left face to the right face. This results in seven sets of 63 geometric elements. Take a moment to count them as well. These seven stand opposite another seven sets of 63 geometric elements on the opposing stone.

As you can see, the gematria of the Names is deeply embedded throughout the measured geometry of the luchot, and there are many more examples, however we will now shift our attention to the remaining three Names in the supernal stream which are the expansions of Ehyeh (expanded with yud, heh and aleph). 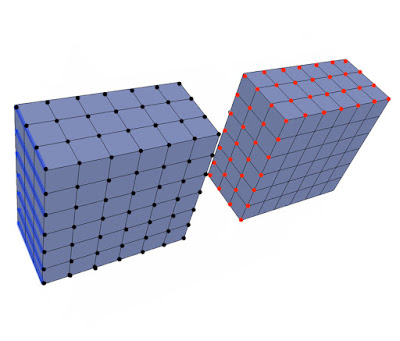 The next of these gematriot is 151. Examine the model below and you will again find the base gematria of Ehyeh (21) as a primary facet of the geometry pertaining to its expansion. 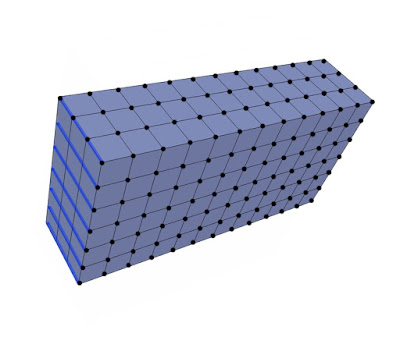 This brings us to the expansion with a gematria of 161 which is very similar to the gematria above. The base gematria of Ehyeh (21) is again present. 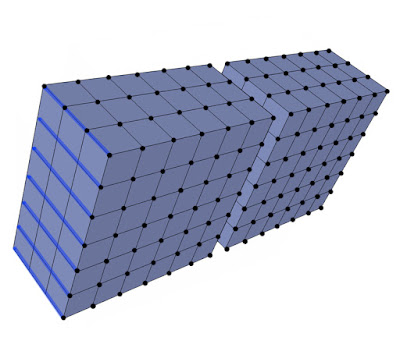 Notice that in each case, the base gematria of Ehyeh (21) is a primary facet of the geometry and that all additional geometric elements having to do with its expansion are in the zero-dimensional form of intersecting points between its linear handbreadths.

In physics we use the term super symmetry to describe what is observed in the mathematic nature of the universe. Here, we see the origin of this super symmetry in the geometry of the foundation stone and it's twin halves.

To give you a glimpse of how this plays itself out in the universe of bonds, dots and stripes, we simply return to the moment known as "the shattering of the vessels," when 288 sparks "fell," and "the stone was cast into the abyss" (the abyss being the physical universe as explained in the previous post). "One end [was] attached to the world below" (for Israel to "gather") "and the other to its source above," in the letters of God's Name.

What were these sparks, and what form do they take in the physical universe?

The stone cast into the abyss was the stone that was divided and brought down by Moshe. After its division, the combined measurement of its two halves (the shnei luchot or two tablets) had an external measure of 288 square handbreadths as shown below. What did Moshe do with the tablets? He shattered them and they fell. The reality below (the shattering of the luchot/tablets) was simply a reflection of the 'events' in the world above (the "shattering of the vessels" and "the 288 sparks that fell"). The knowledge of God's Name as it pertains to the physical universe was thus lost to mankind.

Is it possible for man to return to his former estate? If so, how is this to be achieved? The simplest answer is the study of the 'otiot' (the letters2 which flow from the geometry) of the Torah, and more specifically the primordial Torah. This is the point in time when kabbalah and science catch up with one another (the Vilna Gaon). 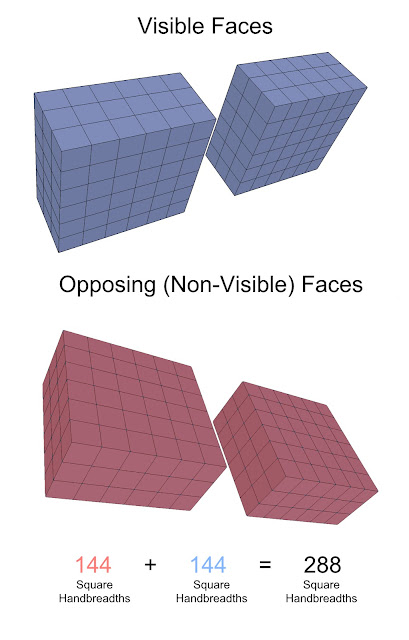 The 288 sparks that fell allude to the need for study of 'measurement' (metron as in metatron means to measure). The study of measurement pertains to the mathematic system defined by "the stone" that was "cast into the abyss" (brought down by Moshe). More specifically, this refers to the measure and geometry of the shnei luchot or tablets and the corresponding letters of the Name that 'rule' the universe.

The parallels between all of these facets hold true only in lashon hakodesh (the holy language of Hebrew) because it is the only language that conforms precisely to the nature of the mathematic system 'embedded' in the measure of the luchot.

Contemplate this, and you will realize that it is impossible. Yet, it is a fact. For this to have happened, the mathematic nature (gematria) of the letters, the language, the linguistic structure of the Torah, and the measured geometry of the luchot, would all have to have been crafted/defined as part of a larger program engineered by a quantum computer. The fact that it is also a reflection of such things as the subatomic nature of the universe as well as the celestial nature of planets and stars, together with their movement (see the post on the primordial torah) proves beyond doubt (an absolute zero probability) that it was not designed by any computer, or a group of men trying to fabricate the existence of God. Rather, it is truly of divine origin and entirely orchestrated by the Hand of a very real God. Understand this well.

This brings us to a famous queen by the name of Esther and the Purim story. What does it mean to rule 127 provinces (half the kingdom plus one province) as in megillat Esther. Nebudcadnezzar had ruled all 252 provinces. Half the kingdom was therefore 126 provinces. Ahashverosh was said to rule only half that amount, or 126 provinces (plus one1). This should be taken literally. However, to show how the event has its origin in the primordial torah (or how the "StoRy/SiPpuR" is a geometric function of the SaPphiRe/SaPiR  "foundation stone," consider the following:

The measure of the one-dimensional vertical-linear handbreadths on the two visible sides of the tablets/luchot (the lines between each point of intersection) is 126 handbreadths, like the number of provinces in half the kingdom. These are shown in blue below. The opposing sides of the tablets (the edge of which is only partially seen in the model below) have the exact same measure: 126 linear handbreadths. The measure of the vertical linear handbreadths on this side (the other half of the "kingdom") are all but hidden. The nature of a three-dimensional object, in three-dimensional space, nevertheless allows us a glimpse of one one full line of handbreadths (one province) from the other side (or plus one "province" from the other half of the kingdom").

252 Linear Handbreadths (on both sides) 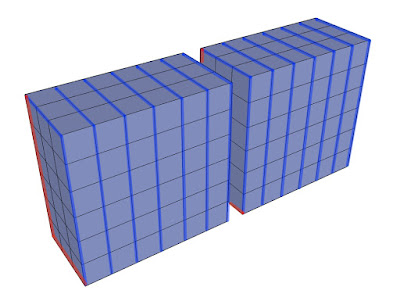 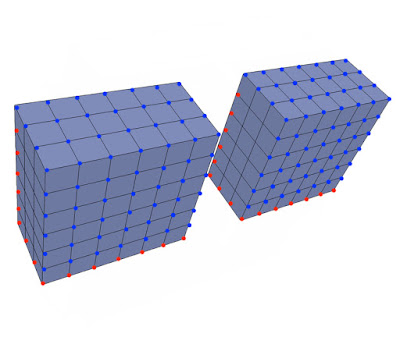 The total number of intersections between each linear handbreadth is 126 + 126 or 252. Note that "half" equates to the 63 points of intersection on two contiguous faces of two tablets. However, because of the nature of its three-dimensional geometry, one row (one dimension from the opposing side) can be seen on the visible side (plus one province) and vice versa. The linear handbreadths connecting these 252 provinces can be thought of as the 'roads' between each province. We showed the significance of these roads "between provinces" in the post on the "42 Letters in Sapphire" where it defined the internal and external measurements of each cubic handbreadth.  Your homework is to find the 42 letter Name in the internal tetrahedral geometry. The answer to this question can be found in the post on "the Incense and the 216 Letters").

When you contemplate everything above, it is an exercise in meditation. Be forewarned that with a little knowledge of Hebrew and a genuine knowledge and understanding of the letters in God's Name, it may result in an expansion of consciousness and genuine enlightenment. If you engage in avodah zarah (strange worship or that which is idolatrous in nature) this meditation is not recommended. If you don't know what this means, you should consult a competent torah-observant rabbi.

This concludes our explanation of the gematria of the Names in the supernal stream and their relation to the geometry of the foundation stone (the Name being inscribed in the stone). Why seven Names? The next construct entitled "the Seven Eyes of God" provides us with insight.